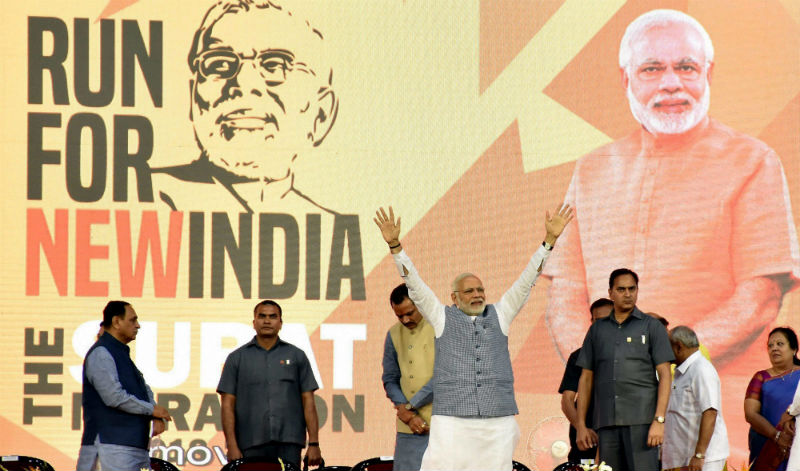 Prime Minister Narendra Modi has urged people to build a "new India" which is free of casteism, communalism and corruption.

The prime minister was addressing a massive gathering at the Lalbhai Contractor stadium here before flagging off the Surat Night Marathon, which has 'Run For New India' as its theme. 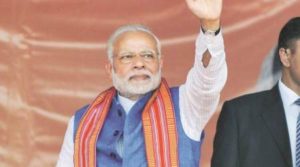 "When the whole world has started accepting the importance of India, we need to shed our shortcomings. We need to build a new India which is free from the venom of casteism. It should be free from communal controversies. There can not be a place for corruption in this new India," Modi said.

In this "new India", aspirations of the youth should be fulfilled, women should be respected, and it should be free from poverty as well as filth, he said. 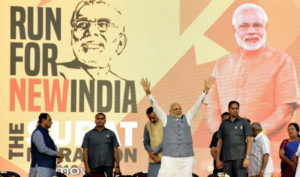 "A country is not built by the government or administration or even politicians. A country is built by the strength of its citizens. No power in this world can stop us if all citizens make a resolution and move in the direction of building a new India," he said.

The prime minister urged the people to start working towards achieving this goal by 2022, when the country will celebrate 75 years of Independence.

"Mahatma Gandhi gave a call of 'Quit India' in 1942. And, in 1947, that is within five years, Britishers had to leave India. Today, we too have five years' time to build a new India. We can achieve this if 125 crore Indians make a resolution that we will not stop," he said.

"Let's pledge to make a new India... It is our responsibility and also our best tribute to our freedom fighters," he said.

Showering praise on Surat, Modi said by organising such a largescale event, the city has proved it can achieve any goal with the help of people's determination.

The prime minister then asked the people of Surat to make him two promises.

"October 31 is the birth anniversary of Sardar Vallabhbhai Patel. I appeal that we should organise a 'Run For Unity' across the country as a tribute to him on that day every year. Will you (citizens of Surat) break all the records by organising a mega event here," he asked, to which a cheering crowd replied "Yes".

"21 June is International Yoga Day. If Surat makes a resolution, it can break all previous records of organising a public Yoga event. I am confident that Surat can do it," he said.

"Surat is running and making Gujarat run. These (Yoga and marathon) are required for good health. If people are fit, our country will never become unfit," the prime minister said.

The city is looking to create a new record in terms of number of participants in a marathon, with the organisers, Surat Nagrik Samiti, saying 1.28 lakh people had registered for today's event and the actual number may be higher. PTI