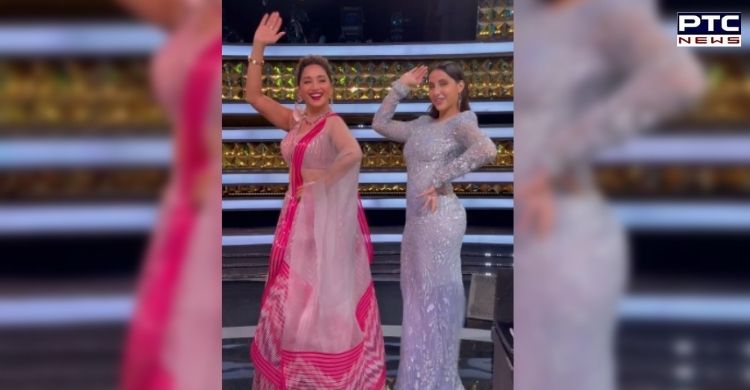 Have you ever imagined the 90's iconic dancer Madhuri Dixit and 21st century's sizzling Nora Fatehi together on one stage? Well, if you haven't then you can watch them as both of them set the stage on fire on the reality show 'Dance Deewane 3'.

The iconic dancer Madhuri Dixit is already having a huge fan following and with this, she is on the verge to increase the number of her fans.

Currently, she is one of the judges on the reality show ‘Dance Deewane 3’ along with other choreographers Tushar Kalia and Dharmesh Yelande.

Madhuri Dixit often recreates her iconic songs with celebrity guests during the show. Recently, Nora Fatehi, who is ruling hearts with her impeccable dance moves, was seen on the reality show.

Madhuri was looking stunning in her traditional white and pink lehenga whereas Nora was wearing her silver floor-length gown.

In another video that has gone viral on social media, they were seen grooving on the hook steps of Nora Fatehi’s song ‘Dilbar’. The dancing divas gave a sizzling performance with fans going gaga.

On the work front, Madhuri is set to make her digital debut with Netflix Original series titled ‘Finding Anamika’ while Nora Fatehi was last seen in the song ‘Chhor Denge’.