Maharashtra Assembly elections 2019: Chief Minister Devendra Fadnavis, his wife Amruta and mother Sarita cast their vote at a polling booth in Nagpur on Monday. Voting for 288 constituencies in Maharashtra began from 7 am onwards on Monday. Prominent personalities from the fields of acting, sports, and politics exercised their franchise. They included actors Aamir Khan and Madhuri Dixit, legendary cricketer Sachin Tendulkar and Union Minister Nitin Gadkari, among others.

Shiv Sena chief Uddhav Thackeray, wife Rashmi, and sons Aditya and Tejas also cast their vote in Bandra (East). Aditya Thackeray is a candidate from Worli constituency. After casting his vote, Nitin Gadkari said, “Considering the amount of work and development Maharashtra CM Devendra Fadnavis has done in Maharashtra in the last 5 years, I am sure we will have a record-breaking victory.” 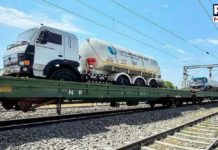