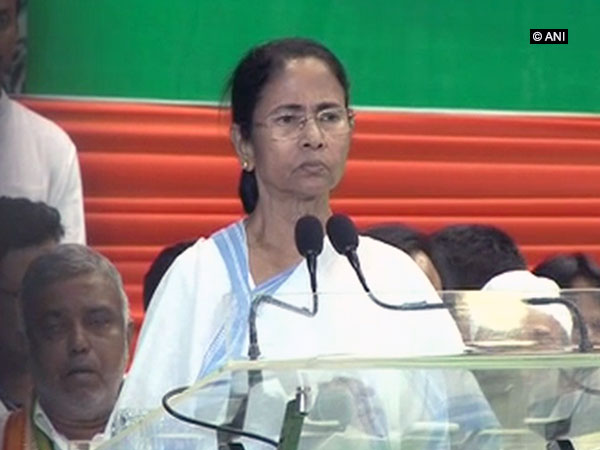 Kolkata (WB): Accusing the Bharatiya Janata Party (BJP) of dividing the people based on religious identities , West Bengal Chief Minister Mamata Banerjee on Friday urged all regional parties to come together for the sake of the nation while stating it is the 'need of the hour'.

Addressing her party workers here, the Trinamool Congress (TMC) chief said Hinduism means tolerance but the saffron party is dividing the people based on religious identities.

Meanwhile, the leaders of various political parties also echoed Mamata's assertion that the BJP was not a threat and said there would be no scope for the saffron party to form the next government if all regional parties unite.

"This is hundred percent true. The BJP and Prime Minister Narendra Modi cannot do anything, if the regional parties unite together. If the regional parties of West Bengal, Bihar and Uttar Pradesh come together then there will be no scope for the BJP to form the next government," Rashtriya Janata Dal (RJD) leader Ashok Sinha told ANI.

"Regional parties are very important and to underestimate them or to ignore them is disrespect to federal structure," Ranjan told ANI.

"What Mamata Banerjee has said is true. There is strong hold of regional parties in many states. If they believe to defeat the BJP, they should join a grand alliance to defeat the NDA's 33 party alliance," Malik told ANI.

The West Bengal Chief Minister yesterday asserted that the BJP was not a threat as the regional parties were enough to tackle it.

Accusing the BJP of playing politics of division, Mamata said the saffron party also resorted to buying the ministers and MLAs of other parties.

"They divide caste, parties. They divide Hindu-Muslims. They also purchase ministers, MLAs. We don't do that. We believe in unity," she told the media here.

Mamata also stated that the secular parties were always together.

Responding to a poser on having discussions on forming an alliance to stand against the BJP, Patnaik said they did not have any talks regarding the same.

"We had no such discussions today," Patnaik said.