This decision has been taken after the party’s defeat in the council elections.

Earlier, during the assembly elections, AAP had appointed Jarnail Singh as the incharge of the Punjabi unit. 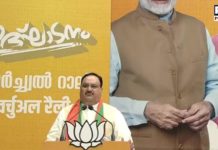