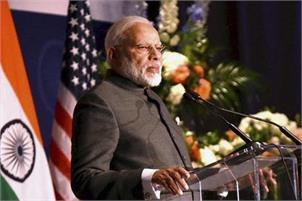 Jerusalem: "Wake up: the most important PM of the world is coming", is how Prime Minister Narendra Modi's forthcoming visit to Israel, the first by an Indian premier, is described in an article in one of the leading Israeli business daily.

Business daily 'The Marker' in a feature story in its Hebrew edition discussing Indo-Israel ties says that Israelis had set up huge expectations from US President Donald Trump's visit to the Jewish state but "he didn't say much" while Modi, a leader of 1.25 billion people enjoying massive popularity and representing one of the fastest growing economies of the world deserves a lot of attention.

Other local newspapers and news portals have also given a lot of attention to the much-publicised three day trip of Modi with The Jerusalem Post even creating a separate link, "Modi's Visit", where it has put up stories related to India.

Most of the local commentators have emphasised on Modi "skipping Ramallah" and it being a standalone visit focussing only on India's ties with Israel.

"Unlike most world leaders, however, Modi, who governs the world's largest democracy and second largest nation, apparently is refusing to visit Ramallah during his Israel trip, and will not schedule meetings with Palestinian Authority (PA) chief Mahmoud Abbas or other PA leaders", Arutz Sheva said in a report.

Modi met Abbas during the PA leader's trip to India in May, and senior Indian officials have visited Abbas at his Ramallah residence during their trips to Israel, it added.

India related activities in Israel have also attracted far more attention in view of Modi's visit than ever before.

International Yoga Day celebrations in Israel saw massive coverage by the Israeli media with some commentators talking about the "soft diplomatic power it arms New Delhi with".

Israel's Prime Minister Benjamin Netanyahu hailed his Indian counterpart's visit to Israel last Sunday during his opening remarks at the weekly cabinet meeting as a "very significant step" in strengthening bilateral relations that are on a "constant upswing".

"Next week, the Indian Prime Minister, my friend, Narendra Modi will arrive in Israel. This is a historic visit to Israel. In the 70 years of the country's existence, no Indian Prime Minister has ever visited and this is further expression of the state of Israel's military, economic and diplomatic strength," Netanyahu stressed.

"This is a very significant step in strengthening relations between the two countries," he added.

India is a huge country with over 1.25 billion people and is one of the world's largest, growing economies. Ties between Israel and India are on a "constant upswing", the Israeli Premier said.

Modi's three day visit starting July 4 is aimed at commemorating 25 years of establishment of diplomatic ties between the two countries.

The Indian prime minister is scheduled to have dinner with Netanyahu following his arrival to Israel on July 4.

He would be meeting the Israeli Premier again for discussions the following day.

Modi would also call upon Israel's President Reuven Rivlin on July 5 and the leader of opposition, Isaac Herzog.

Around 4,000 people of Indian origin would be attending an address by Modi in the evening of July 5 in Tel Aviv.

Among the measures proposed include the establishment of a USD 40 million joint fund to encourage Israeli and Indian business cooperation, agreements permitting and extending incentives to Bollywood filmmakers looking to shoot in Israel, efforts to promote growth in tourism, and a joint government project in the fields of water and agriculture.

Netanyahu and Modi have already met twice on foreign soil on the sidelines of UN-related events and are said to be constantly in touch with each other over the phone.

The defence ties between India and Israel have often drawn worldwide attention and acquired strategic dimensions.

It is believed that Modi's visit would further solidify security ties as Israeli defence industries have shown greater inclination towards participating in joint ventures to give a boost to NDA government's 'Make in India' campaign.

All these visits have laid the ground work for several MoUs that are likely to be signed during Modi's visit.