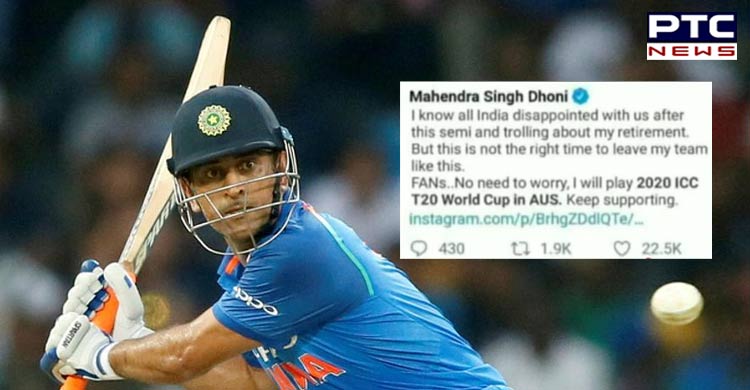 MS Dhoni Retirement speculations have been in the headlines since India was defeated by runner-up New Zealand in ICC Cricket World Cup, in sem-finals at Old Trafford, Manchester. Likewise, there is a tweet making rounds on the Internet which says MS Dhoni is not taking retirement until ICC T20 World Cup 2020, well, is it true? Let's have a look at the fact check.

Well, Mahendra Singh Dhoni was heavily lauded and criticized the same level for taking the team to the end in Semi-finals, where India needed 25 off 10 balls, and condemn the same due to the run-out as people saying that the finished Maahi, is not fit for now. MS Dhoni in Semi-final played an outstanding 50 off 72 balls, that too when the Team India was 5/3 in starting five overs.

As per the Facebook Post, there's a video in which an animated fan is dancing over the tweet which reads, "I know all India disappointed with us after this semi and trolling about my retirement. But this is not the right time to leave my team like this. FANs no need to worry, I will play the 2020 ICC T20 World Cup in AUS. Keep supporting”. Well, the video is posted on July 13, while it's July 20 today.

Also Read: MS Dhoni made himself unavailable for India Tour of West Indies, Here’s the reason why

As per the latest information, MS Dhoni has made himself unavailable for the upcoming India Tour of West Indies 2019, as he is going spend the next two months with his regiment being a Lieutenant Colonel. Also, since there is no such tweet on his Facebook, Instagram, Twitter, the tweet in a video is proved fake (photoshopped). Hence, this video is proven false, which means still the question will be the same. Will MS Dhoni take retirement?