Mulayam blames media, voters for SP's defeat in UP elections 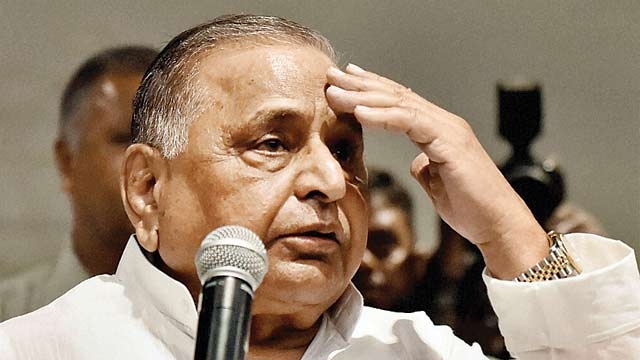 Lucknow: Samajwadi Party patron Mulayam Singh Yadav on Sunday blamed the media and voters for the party's electoral loss in the Uttar Pradesh Assembly polls but the state BJP said that he was "putting a question mark on the wisdom of the people of the state".

Yadav claimed that the media only highlighted the family feud in the Samajwadi Party, while the people of Uttar Pradesh were "befooled" by the BJP.

"Despite rendering a good performance (by the Akhilesh Yadav government), the voters inflicted a defeat to the SP. The people were befooled by call of Chal Modi - Chal Modi, and they went with the BJP".

"The media only gave prominence to the family feud of the Samajwadi Party family. If the media had shown anarchy during the SP rule, it must highlight the same during regime of other parties as well," Yadav said while speaking to reporters in Etawah.

On the issue of change of leadership in the party following the drubbing in the UP Assembly polls in which SP got 47 seats, he said that for him the post of party chief is "meaningless".

The SP patron also categorically mentioned that whatever be his next step, it would be in the interest of the party and people.

The state BJP said that the statement made by the SP chief indicated that he has not been able to digest the SP's electoral loss in the UP Assembly polls.

"SP patron Mulayam Singh Yadav has not only questioned the decision of the voters of UP, but also raised questions on the wisdom of the people of the state," UP BJP spokesperson Manish Shukla said.

Shukla claimed that similar statements were made by the SP patron, after the BJP registered a landslide win in the 2014 Lok Sabha elections.

"The people of Uttar Pradesh have given a historic verdict in favour of the BJP. Instead of questioning the wisdom of the people of the state, the SP should introspect the reasons for its defeat, the mis-governance unleashed by it and the rampant corruption, which prevailed during its rule, else the SP will not be able to retain even its family bastions in 2019 Lok Sabha elections," the BJP spokesperson said.