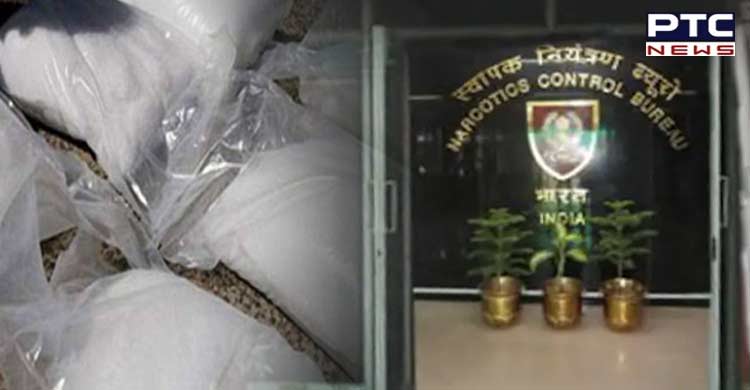 New Delhi, October 7: In a crackdown on the drug trafficking syndicate, the Narcotics Control Bureau (NCB) has successfully conducted an operation wherein an inter-state drug cartel was neutralized and seized around 60 kilograms of high-quality Mephedrone, commonly known as MD, said the officials on Friday.

Six people have been arrested in connection to the matter including the kingpin and his key associate. Initially, the information was shared by the Naval Intelligence Unit, Jamnagar, Gujarat about the suspicious activities of a few persons. Thereafter, NCB actively started working in coordination with the agency upon the input and closely monitored various aspects of the specified targets and started gathering additional information.

Gradually, it was noticed that a bulk consignment of high-quality drugs is about to be transported out from Gujarat to other states.

To this, the NCB urgently sketched a plan of action to not only apprehend the prime targets along with the contraband but also maintained a low profile so as to maintain the surprise element to other essential associates.

Thereafter, during interrogation, investigation of the case and revelations made by the persons, major drug linkages and associates were indicated who were operating from Mumbai.

Accordingly, the NCB team was alerted about the ongoing developments to which discreet surveillance was mounted upon the identified targets based in Mumbai.

Consequently, the target initiated attempts towards drug trafficking after which the NCB team intercepted him.

"Upon preliminary questioning and follow-up action, around 50 kgs of MD was recovered from a godown located at SB Path, Fort, Mumbai on 06/10/2022. Upon further investigative questioning, the kingpin was also apprehended (M I Ali). Thus two persons were apprehended in Mumbai (M.I. Ali & M.F. Chisty) on 06/10/2022," added the statement.

It would be pertinent to mention that one of the persons named SG Mahida was a pilot and served in Air India between 2016-18. He has completed his flying training in San Antonio, Texas, USA and Lithuania.

The other person named Muthu PD is a history sheeter who was arrested earlier also by DRI in the year 2001 in a 350 kgs Mandrax trafficking case and was out on bail since 2008.

During further investigation, it has been noted that the source of drugs in the seizures made in Jamnagar and Mumbai are the same. It was further analysed that the total 60 kgs seized MD is a part of a consignment and has linkages with the earlier seizure of MD made by the Mumbai police.

MD aka Mephedrone is a stimulant drug commonly known as Meow Meow or M-Cat in the illicit drug market and it is classified in the list of NPS i.e. New Psychoactive Substances.