No change in Army's regimental system: Govt sources clarify amid protests over 'Agnipath' 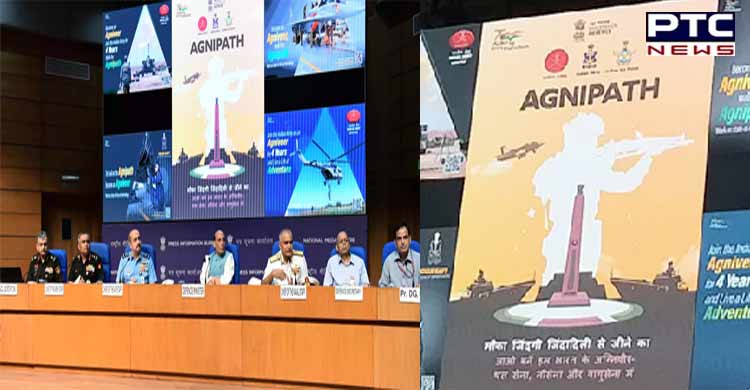 New Delhi, June 16: Amid the ongoing protests, the government sources on Thursday clarified that no change is being done to the Army's regimental system under the 'Agnipath' scheme and the numbers of personnel to be recruited in the first year of its roll out would only make up three percent of the armed forces.

The sources further said that the 'Agnipath' scheme is aimed at increasing opportunities for youths to serve in the armed forces and the recruitment of the personnel under it will be around triple of the current enrolment in the armed forces. The duration of the comparison was, however, not specified.

For the unversed, the Government of India on Tuesday launched the scheme for the recruitment of soldiers in the Army, Navy and the Air Force largely on a four-year short-term contractual basis, in a major overhaul of the decades-old selection process.

Youths between the ages of 17 and a half and 21 will be inducted into the three services under the scheme. The scheme calls for 25% of the recruits to be retained for regular service when their four-year term is completed.

The personnel who will be inducted as part of the scheme will be known as 'Agniveers.'

Protests against the new scheme have occurred in a number of states. A number of opposition political parties and military experts have also blasted the scheme, claiming that it will have a negative influence on the military's ability to function.

Several regiments that recruit youths from specific regions, as well as castes such as Rajputs, Jats, and Sikhs, were concerned that the 'Agnipath' scheme will change their composition.

"No change is being done to the regimental system. In fact, it will be further accentuated because the best of 'Agniveers' will be selected, further boosting cohesiveness of the units," a source said.

In response to criticism that the short-term tenure of 'Agniveers' will reduce the military's effectiveness, sources noted that such a system already exists in other countries and that it has been "tested out and considered best practice for an agile army."

According to sources, the number of 'Agniveers' to be recruited in the first year will make up only 3% of the armed forces, and their performance will be evaluated before they are re-inducted into the army after four years.

"Hence Indian Army will get tested and tried personnel for supervisory ranks," the source added.

They further said that most armies across the world depend upon their youths and the new scheme will only bring about a right mix of "50 percent-50 percent" slowly in a very long run of youngsters and experienced personnel in the supervisory ranks.

As per the sources, the scheme was launched after extensive consultations with serving military officers over the last two years and the proposal was framed by the Department of Military Officers staffed by military officers.

The sources also dismissed claims that 'Agniveers' could pose a threat to society once they leave the army.

"This is an insult to the ethos and values of the Indian armed forces. Youngsters who have worn the uniform for four years will remain committed to the country for the rest of their lives," the source added.

"Even now thousands retire from armed forces with skills, but there have not been any instances of them joining anti-national forces," the sources concluded.