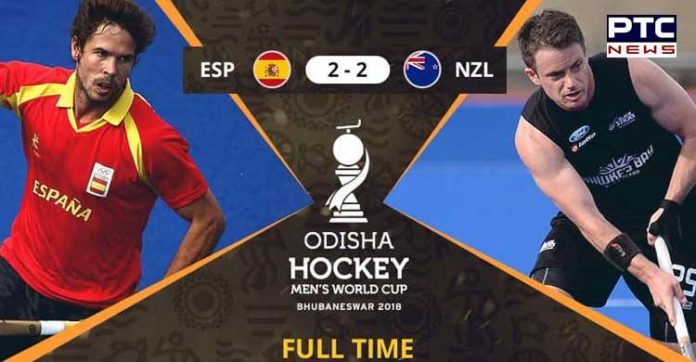 New Zealand overcame a 0-2 deficit to hold Spain to a 2-2 draw in a pool A match in the Odisha Hockey Men’s World Cup at Kalinga Stadium in Bhubaneswar on Thursday. The draw puts New Zealand in number two position with four points while Spain has only two points from three games.

In consonance with earlier pool games, fourth quarter continued to be the most productive period of the game today. Kiwis, who were trailing 0-2 till the start of the final quarter, came back strongly to end with even honours.

It was Hayden Phillips who drew the first blood for New Zealand in the 50th minute followed by penalty corner conversion in the 56th minute by Ken Russell from the only penalty corner Kiwis got in the game today.

Spain forged ahead in the ninth minute with a brilliant goal from Albert Beltran.  He picked a through pass inside the striking circle and slammed the ball in the roof of the net. Though the Spain, who needed a win to stay in hunt for a place in the knock out round, had been on the offensive in the first quarter, but  inaccurate finish and some dogged defence by  Black Sticks  prevented them from scoring for first nine minutes.

But once Spain took the lead, it consolidated its position with another goal, this time by Alvaro Iglesias, in the 27th minute.

Two times World Cup finalists Spain have a much better track record than New Zealand who is yet to reach the medal round in this elite FIH event. Of the previous 26 encounters, Spain won 15 and lost six while remaining have ended in draws.