Accusing the opposition parties of targeting Prime Minister Narendra Modi with a torrent of “abuses” in frustration over their “poor” show in the ongoing Lok Sabha polls, the BJP on Tuesday said people will give them a befitting reply on May 23 when votes are counted.

At a press conference, BJP vice president Baijayant Jay Panda and its media head Anil Baluni claimed that the “Modi wave” will help the saffron party gain many seats from states like Odisha and West Bengal, leading it to better its tally of 282 seats in 2014.

Panda said the opposition, which is in “panic mode”, has been “abusing” Modi, referring to Congress leader Priyanka Gandhi Vadra’s comparison of the prime minister with Duryodhan, the antagonist to righteous Pandavas in epic Mahabharat.

He also referred to West Bengal Chief Minister Mamata Banerjee’s remarks that Modi should get a “tight slap of democracy” to attack the opposition.

Her desperation shows how much the ground has shifted in the state, Panda said.

Baluni said Congress leaders have “abused” Modi as he had spoken about their past misdeeds, a reference to his attack on former prime minister Rajiv Gandhi.

“Why are Congress leaders apprehensive of their past? Their language is reflective of their frustration at their impending defeat. We repeat our challenge to the Congress to debate with us on the performance of its governments,” he told reporters.

To a question about BJP general secretary Ram Madhav’s reported remarks that the saffron party may not get a majority on its own, Panda said Madhav has also clarified that he was misquoted, and asserted that no one in the party has any doubt over crossing the half way mark in Lok Sabha.

He also played down Modi’s appreciation of the work of the BJD government in Odisha to tackle cyclone Fani, saying politics should not be seen in governance. 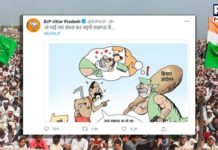 BJP ‘warns’ farmers ahead of ‘Mission UP’, tweets controversial cartoon