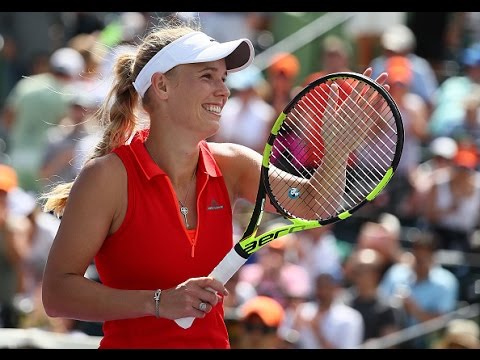 Charleston: Jelena Ostapenko decided to put Charleston on her schedule this year for the first time. It likely won't be the last time.

The 19-year-old Latvian upset Caroline Wozniacki 6-2, 6-4 on Friday night to reach the semifinals at the Volvo Car Open.

That's heady stuff against a player that had reached the quarterfinals or better at 11 of her last 14 events. If Wozniacki had made the semifinals, she was projected to return to the WTA top 10 when the new rankings are released Monday.

"Yeah, it feels amazing," Ostapenko said. "I just knew before the match that I have to stay aggressive all the time and still be consistent. And I tried not to step back, just to be like play in the court all the shots. And I think that's helped me today."

Ostapenko converted 22 of 30 first serves (73 percent) and saved four of five break points against Wozniacki, who was the highest remaining seed in the tournament.

Wozniacki had won two matches on a windy Thursday after her second-round match was rained out Wednesday night, forcing her into double duty, and was the lone former champ left in the draw.

"I really tried my best out there," the Danish star said.

"I was trying to grind everything down. I tried to change the pace when I had the opportunity, but I mean, if she played like this every day, then I mean she would be No. 1 in the world.

"You know, she really played well. She went for her shots. Everything was going in. She was hitting the lines.

Everything that could go her way today was going her way."

In other quarterfinal action on the green clay at Daniel Island, Mirjana Lucic-Baroni of Croatia beat hometown favorite Shelby Rogers in three sets.

"It was beautiful in a way," said Lucic-Baroni, who had never been past the round of 16 at Charleston. "It was difficult playing against the crowd, because Shelby is from here. It's normal. It's always tough, but I felt they were very respectful. They were cheering for their home girl, and it's totally normal."

After losing the first-set tiebreaker, the hard-hitting Lucic-Baroni refused to fold and shut down Rogers in the final two sets. Rogers did not manage to get to a break opportunity and was broken five times in a row in a match that lasted two hours, 13 minutes.

"I was just trying to fight for every point," Rogers said. "I wish I could have kept it up."

In the other matches, Daria Kasatkina of Russia topped Irina-Camelia Begu of Romania 6-4, 6-1, and Laura Siegemund of Germany beat Latvia's Anastasija Sevastova 6-2, 6-4.

In Saturday's semi-finals, Siegemund will play Kasatkina, and Lucic-Baroni goes against Ostapenko.