Over 300 students forced to sit in corridors at Ludhiana school

More than 300 students of Classes 6 and 7 of Sunet’s Government High School are forced to sit in the corridors of the school for regular classes after the public works department (PWD) last week declared one of the school’s two blocks unsafe.

However, the authorities have ensured the provision of fans in corridors of ground floor of the second block.

Riya, a student of Class 7, said, “For the past two days, I am attending classes in the corridor and facing a lot of problems. I am not able to understand the concepts as students of other sections are also sitting in the same corridor which leads to disturbance.”

Teachers confirmed that wide cracks had appeared on the roofs of ‘unsafe’ rooms, which also were marred with continuous leakages that ultimately forced the PWD to certify them dangerous.

Officiating in-charge of school, Manju Bala said, “Fans have been installed in the corridors on the ground floor of the building to fetch some relief for students from a sultry weather. We will provide fans on the first floor in a day or two too. We have already informed the district education office about the ‘unsafe’ status of our school’s nine rooms and requested for provision of funds for the construction of new classrooms.” 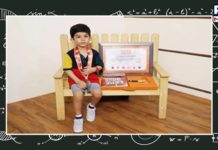 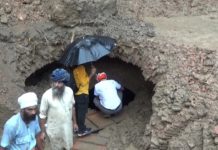 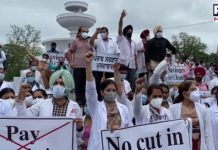