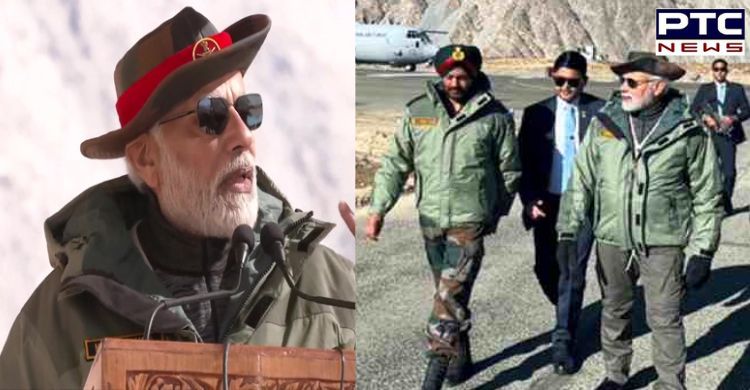 Kargil (Ladakh), October 24: Prime Minister Narendra Modi, who arrived in Kargil on Monday to celebrate Diwali with soldiers, said that India never considered war as a first option, but that if someone casts an evil eye on the country, the armed forces will respond accordingly.

"We have never considered war to be the best choice...We tried to postpone the conflict in Lanka and Kurukshetra until the very end. We oppose conflict, but peace is impossible without strength. If someone dares to look at us with evil eyes, our armed forces will respond appropriately," PM Modi said to the soldiers.

He stated that if India's strength increases, it will benefit global peace and prosperity.

"From this victorious land of Kargil, I wish the countrymen and the world a very happy Diwali. There has not been a single war with Pakistan where Kargil has not hoisted the flag of victory. Diwali means 'festival of end of terror' and Kargil made it possible. Our Army in Kargil crushed the fountainhead of terror and people to date remember the Diwali of victory the country celebrated," the Prime Minister added.

PM Modi stated that self-reliance is the most crucial aspect of national security. He stated that the country's dependence on foreign weapons and systems should be kept to a minimum.

"I commend all the three armed forces who have decided that over 400 types of defence equipment will not be imported but rather be built in India. When our jawans fight with made-in-India weapons, they will not only feel proud but also have an element of surprise to defeat the enemy," he further said.

The Prime Minister went on to say that the way of warfare is changing in the age of technology. He added that armed forces are ready, with new training, new reforms and new technology.

"Over the last eight years, we have given the emphasis on implementing reforms within the armed forces. We have opened positions in the forces for women. Women's power will strengthen our armed forces. The induction of women officers into 'Permanent Commission' will result in the growth of our power."