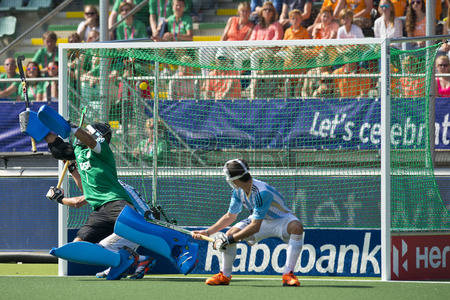 With four of six goals in the Argentina-Holland match coming from penalty corners, the third day of the Odisha Hockey World  League Final ended on a satisfying note for the defending Olympic champions.

With a point each from the game, both Holland and Argentina remain winless as both the teams had suffered shock defeats in their first pool matches yesterday.
Earlier, Belgium notched up an electrifying 5-0 win over Spain to stay at top of pool A.
The South Americans had every reason to feel satisfied with their performance as they came from behind to draw level with the Netherlands in a game that saw a maximum number of penalty corner conversions in the tournament so far. All the goals for Argentina came from penalty corners. In fact, the match equaliser came seconds before the final whistle.
Both Holland and Argentina had a good number of penalty corner awards; While the Dutch could convert only one through Pruyser in the 55th minute, the South Americans scored through Matias Rey (45th minute), Lucas Vila (50th minute) and  Peliat (60th minute).
Brinkman had given the Holland lead with a brilliant field goal in the 12th minute while V. Verga scored a fantastic goal with a rasping drive from the top of the striking circle to make it 2-0 in the 38th minute. Holland, however, could not hold on to the lead and allowed the South Americas to come back and score through penalty corners to split honours and points.