In a big development push in his Lok Sabha constituency Varanasi ahead of the 2019 general elections, Prime Minister Narendra Modi inaugurated a slew of projects here on Monday and took a swipe at previous governments for not taking such initiatives “decades ago”.

Inaugurating projects worth Rs 2,413 crore here, he said the pilgrim city will witness a “confluence of nature, culture and adventure”, and appealed to the people to “preserve the new face” of Kashi (Varanasi).

In a veiled attack on previous governments, Modi said, “Today is a historic day. Today Varanasi and the country (as a whole) is witnessing a development that should have taken place decades ago. But that did not happen.”

Claiming that when he had initially spoken about launching a multi-modal terminal on the Ganga river “people made fun and indulged in negative talks”, the prime minister said, “But now, these projects are living examples of new India’s new vision.”

The prime minister, who had to stop his speech several times amidst the chanting of “Modi, Modi” by enthusiastic party workers, asked them to “save this energy till 2019, it will be needed”.

Referring to the multi-modal terminal on the Ganga river, Modi said the next generation was poised to witness a sea change in the transport sector.

The prime minister said it took decades to complete the work but expressed happiness that the dream has been realised in Varanasi and it will help connect eastern Uttar Pradesh with the Bay of Bengal through waterways.

“The residents of Kashi are witness to how it (waterways) was mocked four years back and negative things were said… But those indulging in such things have been given a reply today through the first container arriving from Kolkata… This container is a testimony to the new vision of new India,” he said.

The prime minister alleged that previous governments have paid no attention on waterways rather it got harmed after Independence.

“The previous government did injustice to rivers, which is being undone by our government. A hundred waterways are being developed,” he said.

“It is for the first time after Independence that a riverway is being used for trade… The container which has come from Kolkata will return with fertiliser… Things made here will go to the docks of eastern India… This is only an example that the day not far when things made in Varanasi and other areas will pass through this waterway,” Modi said.

“Just think how big opening this will provide for agriculture and farmers. A new alternative will be available for transport through waterways. Sixteen trucks are needed to ferry things coming in one container. Rs 75,000 have been saved… This will lessen the load on roads and check pollution, promote tourism, especially cruise tourism, and linking with the eastern region…This will be as per the culture and heritage of Kashi,” he said.

Modi stressed that the people of the country only wanted politics of development.

“People take their decisions on the basis of development and not on vote bank politics,” he said.

Recounting his government’s achievements, the prime minister said, “We paid attention to small things which affect common people, like cleanliness and health. We worked on them seriously… Rural cleanliness, which stood at below 40 per cent before 2014, is now over 95 per cent and this is a matter of pride for me.”

“The ‘Ayushman Bharat’ scheme has ensured medical treatment for the poor. Over two lakh people have so far availed it within 40 days of its launch… ‘Namami Gange’ is on a new phase. The money meant for it is not being thrown away in the Ganga, but being spent on cleaning the river… But during the previous governments, crores were thrown away in the name of Ganga cleaning,” Modi said.

He asserted that for the BJP-led government, it is the development of the country and its people which is of utmost importance.

The prime minister started his 35-minute speech in the local dialect and greeted the people on the occasion of Chhath festival. He ended his speech with the chant ‘Har Har Mahadev’.

During his visit to the constituency, Modi inaugurated India’s first multi-modal terminal on the Ganga river and received the country’s first container cargo transported on inland waterways from Kolkata.

He also inaugurated two important roads, having a total length of 34 kilometres and built at a cost of Rs 1,571.95 crore, in his Lok Sabha constituency.

The Ring Road will provide easier and more convenient access to Sarnath, an important site for Buddhist pilgrimage.

These projects will also provide increased employment opportunities, development of small and medium industries and give a boost to economic development in the area, the prime minister said.

He also inaugurated two sewage infrastructure projects worth Rs 425.41 crore in Varanasi and laid the foundation stone for another project worth Rs 72.91 crore for Ramnagar. 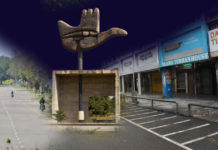