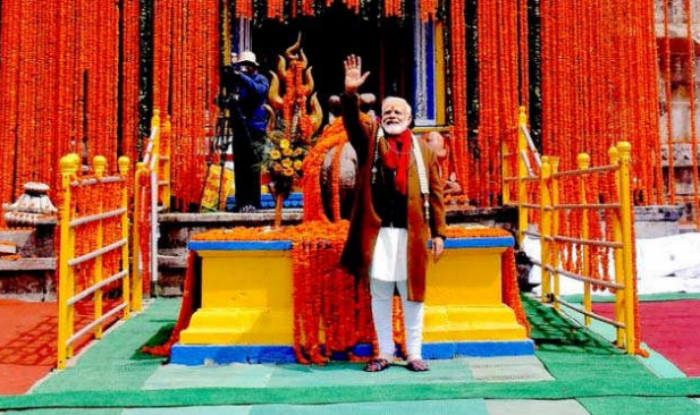 Dehradun: Prime Minister Narendra Modi today paid obeisance at Kedarnath as the portals of the Himalayan shrine were reopened for devotees after remaining closed for six months for the winters.

Accompanied by Uttarakhand Governor K K Paul and Chief Minister Trivendra Singh Rawat, Modi arrived in an army chopper at the helipad built close to the temple and headed straight for the shrine located at a height of over 11000 ft.

The temple doors were opened at 8.50 AM and the prime minister arrived just about half an hour later to offer prayers and perform a 'rudrabhishek' in the sanctum sanctorum of the centuries old shrine.

After 20 minutes, Modi, who was wearing a brown overcoat, emerged out of the temple and waved to the crowds waiting outside for a glimpse of the Prime Minister.

He was gifted a shawl, a rudraksha, a wooden replica of the temple and books on the Himalayas by the priests of the temple as he came out of the shrine.

He did a 'parikrama' of the Nandi statue outside the temple before making way through the crowds to convoy that was to take him back to the helipad.

The Prime Minister also went to the spot where a huge rock named Bhimshila had rolled down from the mountains in the wake of the June 2013 deluge and got stuck at the back of the temple.

Christened Bhimshila after the tragedy, also known as the Himalayan Tsunami, the truck sized rock is credited with protecting the shrine from major damage.