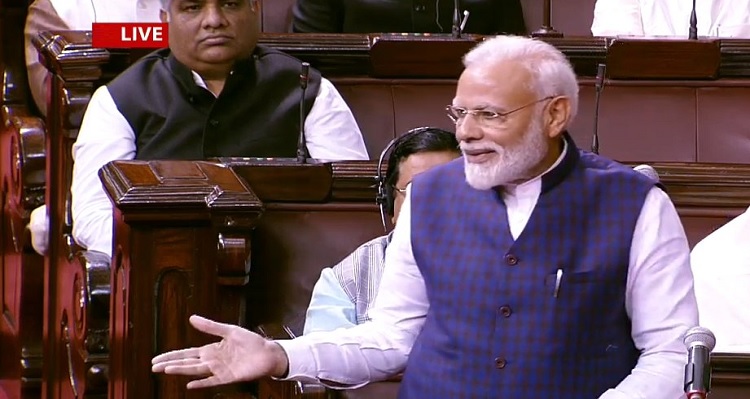 Prime Minister Narendra Modi on Monday addressed Rajya Sabha on the first day of winter session of Parliament. Also, it is the 250th session of the House. He said, "This house has seen many historic moments, it has made history also and has seen history being made as well. It is a far-sighted house."

" The Rajya Sabha gives an opportunity to people away from electoral politics to contribute to the country and its development," he added. Meanwhile, he said, "Whenever it has been about good of the nation, Rajya Sabha has risen to the occasion. It was widely believed that Triple Talaq bill would not pass here but it did. Even GST became a reality after it was passed in this house."

Adding, he said "Our Constitution inspires us to work for a Welfare State. It also motivates us to work for the welfare of states. The Rajya Sabha, as the Council of States enables us to further the spirit of cooperative federalism." "We can never forget the role of the Rajya Sabha when Bills pertaining to Articles 370 and 35(A) were passed. This House has worked to further unity," he added.

Also, he said "The Rajya Sabha is about checks and balance. This is absolutely essential for our Democracy. Debates have to be many and effective. But, there is also a difference between checking and clogging, Balance and blocking."

Appreciating National Congress Party (NCP) and Biju Janata Dal (BJD) Odisha, PM Modi said "Today I want to appreciate two parties, NCP and BJP Odisha. These parties have wonderfully adhered to Parliamentary norms. They have never ventured into the well. Yet, they have made their points very effectively. Much can be learnt from these practices."