PTC Punjabi has conquered all the rivals including Star Plus, Sony Entertainment Television, and Colors to take the number 1 spot in UK ratings, on Sunday. As per the reports by BizAsiaLive.com PTC Punjabi defeated with a huge share of 0.17 percent leaving all the others behind. PTC Punjabi got a huge share of 0.17 percent, while Sony TV stood second with .011 percent followed by Hum TV and New Vision with 0.5 percent respectively. 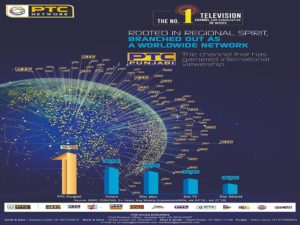 Obviously, this is a major win for the Punjab-based network spreading the name across the World. Following these channels, Geo TV, Colors, Zee TV and Sony SAB TV got .0.4 percent while Star Plus, Star Gold and Star Bharat got 0.03 percent respectively. Meanwhile, B4U Movies received 0.02 percent. Reportedly, PTC Punjabi got an overwhelming response from 15:00 – 23:00, which includes the broadcast of Shabad Gurbani from Amritsar and movies offering at 19:30.

Well, the above data is an overnight figure, which changes slightly after seven days. BizAsiaLive.com publishes consolidated figures every Monday, and hence this week PTC Punjabi topped the list of other broadcasters. Though other channels broadcasters The Kapil Sharma Show, Dance India Dance, Dance Deewane, Superstar Singer, but the people in the UK gave love to the PTC Punjabi.