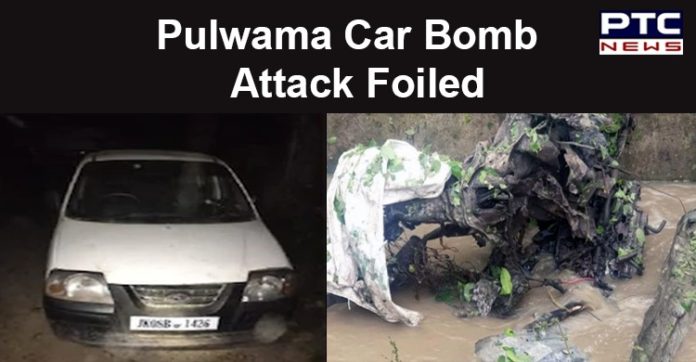 A ‘Pulwama-like attack’ was prevented by the timely action of the security forces on Wednesday night in Pulwama district in Jammu and Kashmir. As per the sources, the incident took place between 8:45 pm and 9:15 pm at Ayangund village.

A police officer stated that a naka was set up by the security forces. While the vehicles were being checked, a car jumped the barricade and tried to flee the spot,” a police source said.

Vijay Kumar, IG Police Kashmir, stated that “We had received information that a militant of Jaish-e-Mohammed is going to carry out the operation. So, we suspect that Adil (occupant of the car carrying IED) – a Hizbul Mujahideen militant is also in touch with Jaish-e-Mohammed.”

#WATCH Inspector General of Police, Kashmir, Vijay Kumar speaks on Pulwama car bomb attack which was averted by security forces today. He says, "Jaish-e-Mohammed has the main role in this. Hizbul Mujahideen assisted them." pic.twitter.com/eeHOqj8gjO

He added that “Adil intended to target the vehicles of security forces. We are calling expert teams from the outside. We suspect that the vehicle was carrying 40-45 kg of explosives.”

Vijay Kumar said that “Jaish-e-Mohammed has the main role in this. Hizbul Mujahideen assisted them.” Reportedly, the explosives were disposed of on Thursday by a bomb disposal squad. Also, the car (a Santro) had a fake number plate.

As many as 40 CRPF soldiers were killed on February 14 last year after a car bomb was used by the militants in Lethpora area of the Pulwama district. The attack is referred to as the Pulwama-like attack.