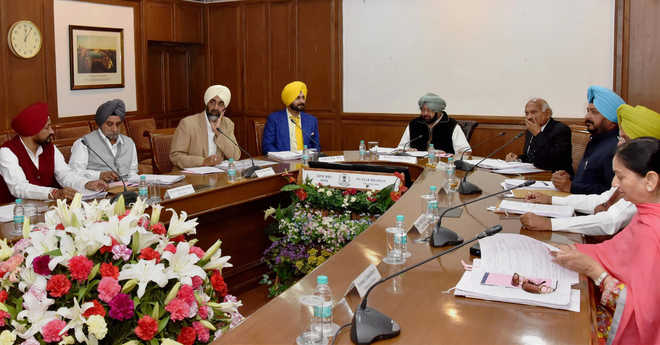 Chandigarh: The Captain Amarinder led government has decided to enact the "Punjab State Farmers Commission Act-2017" to empower and safeguard the interests of the farming community, besides setting up a 'Punjab State Council for Agricultural Education' to promote agricultural education in the state.

These were among the slew of important decisions taken here on Friday by the Council of Ministers, led by Chief Minister Captain Amarinder Singh.

An official spokesperson disclosed after the meeting that the proposed Council would be set up by bringing an Ordinance - Punjab State Council for Agricultural Education Ordinance 2017, and would be aimed at promoting and coordinating agricultural education in various colleges and institutes in the state.

It would be entrusted with the task of developing guidelines and regulating higher agricultural education in the state through grant of recognition to colleges/institutions/departments that meet the norms and standards prescribed to run educational degree programmes in agriculture.

Once granted recognition, the recognized colleges/institutions/departments shall automatically follow the prescribed system of education in governance including infrastructure (class rooms, laboratories, equipment, instructional farms, etc.), procedure of admission, recruitment of staff, resident instruction, course curricula, pattern of examination, etc. as may be directed by the Council from time to time.

In the other decision, aimed at granting legal rights to farmers, the Cabinet gave the nod to the enactment of "Punjab State Farmers and Farm Labourers Commission Act-2017" through an Ordinance. The five-member commission, with nominated Chairperson, Member Secretary, VC PAU, VC GADVASU and ACS (Development)/FCD, will have the powers to frame agriculture policy and other matters referred to by the government.

The Commission will have a corpus fund of Rs. 25 crore initially and Rs.5 crore for next five years grant to be given by the state government, and would be mandated to submit its report to be tabled in the Punjab Vidhan Sabha. The Chairperson of the Commission will have status of a Cabinet Minister and the Member Secretary would be in the rank of Secretary to Government.

In another initiative, aimed at tackling the problem of burning of crop residues across the state, the CoM gave its nod to the creation of a 'Climate Challenge Fund'. The fund will help the state in creating awareness amongst the farmers about the harmful effects of crop residues burning. The Cabinet also agreed in principle to create a fund of Rs one crore for giving incentives to those farmers adopting mechanical solutions to deal with crop residues.

The Cabinet also decided to create a new entity, called the 'Directorate of Ground Water Management', under the irrigation wing of the Department of Irrigation and Power, for conservation, utilization and management of the depleting Ground Water resources in the state. The existing water resources administration of the department of Irrigation will be subsumed into the new directorate.

It may be noted that due to limited allocation to the state in the river waters, about 73 percent of irrigation requirements are met by ground water, which is depleting rapidly. Thus, effective management of Ground Water Resources is of paramount importance and the creation of this directorate would help the state to address this problem in a scientific manner, said the spokesperson.