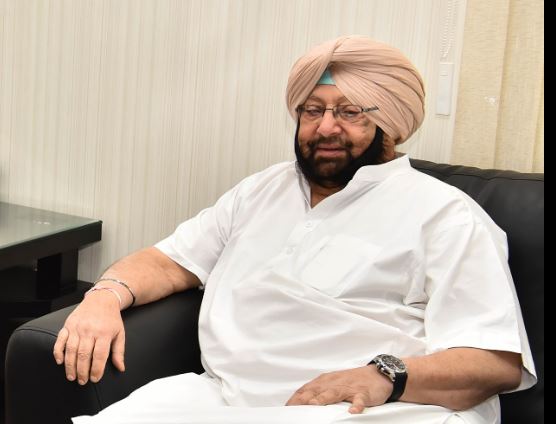 New Delhi: Punjab Chief Minister has pitched for financial assistance from NITI Aayog to mitigate the financial distress of the farmers through a one-time debt waiver, while seeking a special package from the Government of India to promote major industrial hubs in the state.

The Chief Minister’s strong appeal for central assistance came through his speech, which was circulated and taken on record at the third Governing Council meeting of the NITI Aayog here on Sunday. Captain Amarinder could not attend the meeting due to unavoidable reasons.

Lauding the central government’s Smart City initiative, the Chief Minister mooted the establishment of Smart Villages on the same lines for the development of Punjab’s rural infrastructure. He urged the central government to launch a Mission for this purpose, with adequate funding to upgrade rural infrastructure and bring the benefits of technology and markets to the state’s rural areas.

In his speech, Captain Amarinder chronicled the urgent and crucial challenges confronting the people and the newly constituted Government of Punjab, which had been left with the humungous task of bringing the state out of its present financial distress, stagnating agriculture and industry, rising unemployment, collapsing urban infrastructure, declining agricultural income and consequent rural distress.

Citing the massive Rs. 1,82,000 crore financial debt inherited by his government, the Punjab Chief Minister requested the central government to consider a one-time debt waiver and debt swap as a special dispensation for the state to enable it to come out of financial difficulties.
Referring to the state government’s plan to promote employment and micro-enterprises in its endeavour to fulfill its promise of `Ghar-Ghar Mein Naukari’, Captain Amarinder urged the Government of India (GoI) to provide direct subsidy of Rs 100,000 to all youth seeking to engage themselves in self-employment after skill development.

The Chief Minister, in his speech, also sought from the Modi government a one-time infrastructural development package for the border areas of Punjab, which has a 553 km long sensitive border with Pakistan. These areas should be given the same level of tax incentives and promotional schemes as provided to the hilly and north-eastern region, he emphasised.

Captain Amarinder called for inclusion of Punjab as a category ‘A’ State for financial assistance on the pattern of Jammu & Kashmir and eight north-east states under the Modernization of State Police Forces scheme, with Central funding on 90:10 basis. This, he stressed, was necessary for the upgradation of the police in the border-sensitive state of Punjab.

Seeking comprehensive policy initiatives from the central government for the development of agriculture in the state, the Punjab Chief Minister sought the NITI Aayog’s support in setting up a Deficiency Price Payment Support system to provide farmers with crop remuneration at par with MSP for all other crops in addition to wheat and paddy. This, he observed, would encourage the farmers to shift to cultivation of alternate crops like maize, soyabean, oilseeds and pulses, helping make agriculture more sustainable and leading to better earnings for the beleaguered farmers of the state.

Punjab would also welcome NITI Aayog’s support in planning and implementing micro irrigation systems in agriculture to enhance the water productivity in the state, said Captain Amarinder, while seeking the Centre’s and the Aayog’s support in encouraging the setting up of Agro Food Parks.

Recalling the Prime Minister’s promise to double farmers’ incomes, the Chief Minister sought technical support from NITI Aayog in preparing a roadmap for ensuring the same in Punjab, and also urged it to consider a special dispensation for original Green Revolution states, which face a gigantic task in this direction.

Underlining the criticality of industrial development, Captain Amarinder stressed the importance of promoting micro, small and medium enterprises in Punjab, with special incentives to the border areas and the sub-mountainous area, along the hilly tracts, to promote employment and bring buoyancy in the tax revenue of the state. This, he said, was necessary to ensure balanced regional development.

On the border areas, the Chief Minister once again urged the central government to acquire lands that lie beyond the border fence and, till that is done, pay enhanced compensation to the farmers.

He further underlined the need for the Centre to liberally compensate lands that are damaged or rendered ineffective for farming due to periodic military deployment. Further, he said, the border roads of this area should be taken up for special development and maintenance under the National Highway Programme of the country.

The Chief Minister, through his speech, also urged the Centre to ensure that the flow of funds to the states is not adversely impacted till the GST regime stabilizes.