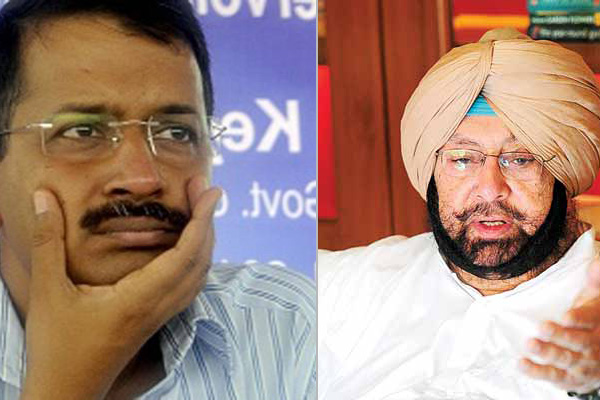 Chandigarh, Nov 14- Punjab CM Amarinder Singh today again ruled out a meeting with his Delhi counterpart Arvind Kejriwal, who wanted to hold talks over the issue of stubble burning, asking him not to "politicize" the serious matter.

Singh claimed he failed to understand why the Delhi chief minister was trying to force his hand, knowing well that any such discussion would be "meaningless and futile".

His response came after Kejriwal sought a meeting with him tomorrow in Chandigarh.

"Sir, I am coming to Chandigarh on Wednesday to meet Haryana CM. Would be grateful if u cud spare sometime to meet me. It is in collective interest," Kejriwal tweeted today.

Singh alleged that Kejriwal's tendency to indulge in petty street politics was well-known.

He said Kejriwal should stop politicizing the serious issue of stubble burning.

He alleged that the Aam Aadmi Party (AAP) leader was "trying to divert" public attention from his government's "failure" to check the problem of pollution in Delhi, as exposed in the National Green Tribunal's response to the "ill-conceived" odd-even scheme.

The problems faced by the national capital and Punjab on this count were completely different with no meeting ground, Singh said.

He said unlike Punjab, Delhi's problem was the result mainly of urban pollution caused by "mismanaged" transportation and "unplanned" industrial development.

Instead of focusing his attention on resolving these issues, Kejriwal wanted to "waste" time holding "useless" discussions, Singh alleged, adding that he, unfortunately, did not have the same luxury of time.

He dubbed Kejriwal's proposed visit to Chandigarh as another example of the Delhi chief minister allegedly leaving the national capital in the midst of a crisis and travelling to other places when his presence was needed the most at home.

"How else can one explain Kejriwal's desperation to seek a meeting with me at this juncture, especially when I had categorically rejected such a suggestion earlier," he Punjab chief minister claimed.

Singh claimed that Kejriwal should stop politicising the issue

Singh had earlier also said there was no point of meeting the Delhi chief minister while asserting that the stubble burning issue was to be resolved by the Centre.

He had even described Kejriwal as "peculiar man", saying he did not understand the magnitude of the problem.

He today said the Supreme Court was also seized of the pollution problem and had already made it clear that it was in favour of a comprehensive long-term solution to it.

"This is what Punjab is also seeking," he said, adding that he was hopeful that the apex court would be show the way in resolving the crisis, with the Centre also pitching in, as requested by Punjab.

He claimed that stubble burning was not a political issue, which Kejriwal was trying to project, but an economic problem in need of economic solutions, which the Centre alone was in a position to provide.

He said he would continue to pursue with the Centre the matter of compensatory allowance for farmers to enable them to opt for alternatives to the practice of stubble burning.