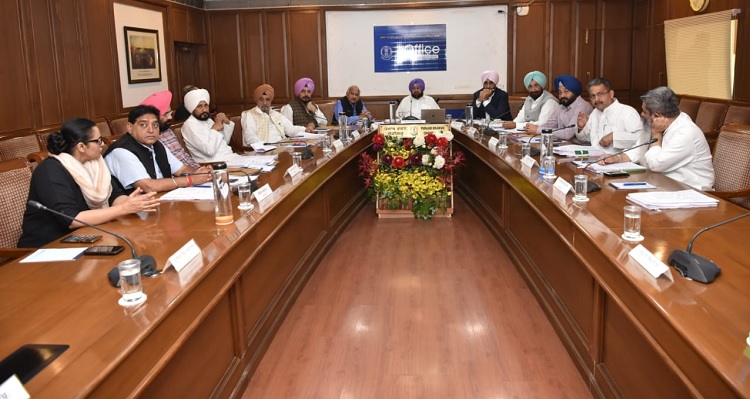 Chandigarh: To make decision making in the government efficacious and transparent, Punjab Chief Minister Captain Amarinder Singh on Friday launched the eOffice facility, to facilitate seamless electronic movement of government files. Punjab is the first state in the country to roll out such an across-the-board initiative.

Launching the hi-tech inter and intra departmental service facility alongwith his cabinet colleagues just before the Cabinet Meeting here at Punjab Bhawan, the Chief Minister asked the officers to continuously innovate to leverage the latest advancements in the field of information technology for the larger public good.

He lauded the Department of Governance Reforms and Public Grievances for the novel initiative, with which all Administrative Departments and offices of Deputy Commissioners would go live and upload all new files and Paper Under Considerations (PUCs) on the portal immediately.

Reiterating his commitment to ensure seamless delivery of Government services, Captain Amarinder also asked the Chief Secretary to further speed up completion of online transmission of revenue records, the progress of which he had been personally reviewing regularly. He also set a deadline for all directorates and other field level offices to upgrade to the eOffice system latest by January 1, 2020.

The new eOffice programme, set to replace IWDMS system, is a National Software Product and is an initiative of Punjab Government and National Informatics Centre (NIC).

The Chief Minister, while noting with satisfaction the rapid strides made by Punjab in digitising its office records, hoped the new initiative would further transform work culture and ethics in government offices, besides eventually reducing the burden of employees by shifting from manual handling of files to online dealing.

With the spurt in technological advancements, the Chief Minister said the outreach to ensure public services had increased exponentially, adding that the state government's endeavour was to fully leverage the advancements in the service of the masses in a hassle-free, efficient and transparent manner.

Following the training schedule, as a trial, the department had implemented eOffice in their branches from October 15 this year, under which 1,21,669 E-Files beaded 6,61,550 e-Receipts had been already generated.

Joint Secretaries, Deputy Secretaries, Under Secretaries, besides Superintendents, Clerks, Assistants and personal staff deployed with officers have also been trained to handle the software efficaciously. The training was held at training labs made at PCS-1 and PCS-2, she added.