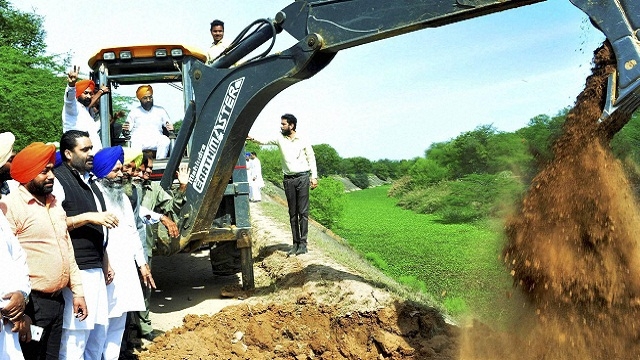 New Delhi: The Punjab government on Thursday apprised the Centre of the critical water situation in the state to stress its inability to share water with its neighbouring states, and urged the Narendra Modi government to intervene in the SYL matter to save Punjab from an ecological disaster.

The case is next scheduled to come up for hearing in the apex court on April 27. At the last hearing, the central government had sought deferment in view of the April 20 meeting convened by it to resolve the issue festering between Haryana and Punjab for the past several decades. The newly installed Punjab government had also sought time from the Supreme Court to prepare its case.

At Thursday’s hour-long meeting, the state government urged the central government to take steps to prevent monsoon run-off to Pakistan and ensure that every extra drop of water is allowed to be used by Punjab, according to an official Punjab government spokesperson.

Pointing out that Punjab did not have surplus water and needed every drop of water flowing through its land, the delegation urged the central government to come up with a realistic solution to the problem, keeping the state’s water scarcity in view.

With only 28% of its land canal-irrigated and the rest dependent on tubewells, Punjab was in urgent need of expansion of its canal system to prevent the water crisis in the state from aggravating to devastating levels, the delegation told the Secretary.

Responding to Dr. Amarjit Singh’s suggestion to initiate strong water conservation measures to counter the problem, the delegation said all possible measures were already being taken but the situation warranted extraordinary measures. The Punjab government suggested lining of the canals in the state to boost the irrigation flow.

Pointing to the alarming decline in ground water table in the state, the delegation noted that the state was losing 12 MAF of ground water every year, leading to a huge stress on the ground water system. In fact, 100 of a total of 138 blocks had been rendered `dark blocks’ as a result of over-exploitation of underground water to sustain agriculture. Of these, 45 had further been declared `critical’ by the Central government, they added.

The delegation further noted that the sub-soil of the southern Punjab region was brackish and the people were dependent on canal water even for their drinking needs. Construction of SYL would lead to an estimated 10 lakh acres of land in the region going dry, they further told the central government.

The Union Water Resource Ministry later met a delegation of the Haryana Government to take their views on the issue.