MP Raj Kumar Saini, who was opposing quota for Jats, had announced a “Samanta Maha Sammelan” in Jind while All India Jat Aarakshan Sangharsh Samiti national president Yashpal Malik had also announced a rally in Rohtak district’s Jassia on the same day.

“The order is issued to prevent any disturbance of peace and public order in the jurisdiction of state of districts as mentioned…,” it said.

It said there was a likelihood of tension, danger to human life and property, disturbance of public peace and tranquility in Haryana by protestors and anti-social elements during the two public rallies on Sunday.

Yesterday, a group of Jats who were opposing Saini’s rally at Jind clashed with the police and blocked the Jind- Chandigarh National Highway in Jind.

The police had to resort to mild lathi-charge to disperse the protesters and the highway was cleared for normal movement of vehicular traffic after a while.

Bharti alleged that Saini was known for his anti-Jat rants and accused him of spreading communal hatred by making inflammatory and derogatory statements against the community. 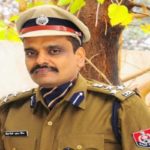