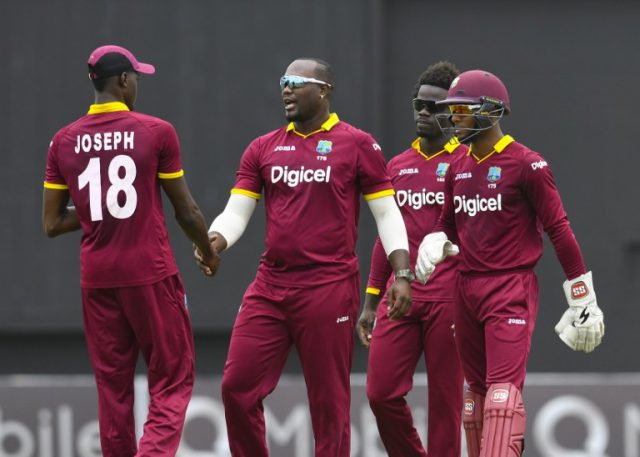 Providence (Guyana): Jason Mohammed played the finest innings of his brief international career to pace the West Indies to an historic four-wicket victory over Pakistan in the opening one-day international at the National Stadium in Guyana on Friday.

Set a daunting target after the visitors rattled up a formidable 308 for five batting first, Mohammed's blistering unbeaten 91 off just 58 deliveries, aided by an explosive cameo at the end from Ashley Nurse (34 off 15 balls), saw the home side successfully chasing a target of 300 or more in an ODI for the first time ever following 31 previous failed attempts over a 44-year period.

With that weight of history against them, Pakistan looked to have put the West Indies out of the match on a relaid pitch that encouraged attacking strokeplay.

Mohammed Hafeez led the tourists' batting effort with a top score of 88 to temporarily quell the rising tide of criticism at his position in the batting line-up ahead of prolific youngster Babar Azam.

Opening batsman Ahmed Shehzad benefited from an early slice of luck to get to 67 while Shoaib Malik, who also capitalised on continuing errant out-cricket by the West Indies, flailed away for 53 off 38 deliveries as Pakistan equalled their second-highest total against these opponents in the 50-over format of the game.

Nurse enjoyed success amid the carnage, the off-spinning all-rounder finishing with his best ODI figures of four for 62.

West Indies' chase started badly with the early loss of Chadwick Walton to Mohammad Amir but left-handers Evin Lewis (47) and Kieran Powell (61) kept their team in with an outside chance even if their comparatively pedestrian progress meant the required run-rate was climbing all the time.

Hafeez and Shadab Khan, making his ODI debut after an outstanding T20 series, provided what seemed the critical breakthroughs but Pakistan captain Sarfraz Ahmed paid a heavy price for relying on his faster bowlers to complete victory.

Recognising the threat posed by leg-spinner Khan, Mohammed targeted the pacers to great effect, most of his three sixes and 11 fours coming off them.

"I knew it was going to be difficult against Shadab," he said after receiving the man of the match award. I decided to go after the fast bowlers and and where to hit them. That clear thinking paid off today."

In contrast, Nurse, who came to the crease after the fall of Jonathan Carter and captain Jason Holder at 259 for six in the 45th over, smashed all bowlers to great effect, his unbeaten 34 coming off just 15 balls with five fours and a huge six of Khan, which effectively ended the match as a contest.

"I was disappointed with the way we bowled at the end," said Ahmed, reflecting on the first time Pakistan have failed to defend a total in excess of 300 outside of the Indian sub-continent.

"Jason batted brilliantly but we need to come back stronger for the second match on Sunday."
Both teams are battling for important rankings points to confirm automatic qualification for the 2019 World Cup in England as one of the top eight teams by the cut-off date of September 30 this year.

Pakistan are currently eighth with the West Indies in ninth spot.