Rs 50 fluorescent note: all you need to know 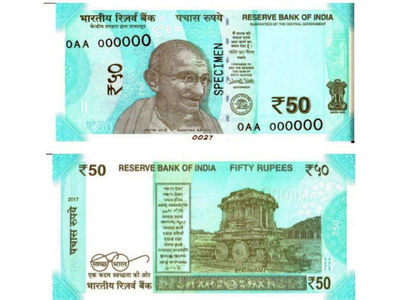 Rs 50 new notes by RBI: After 500 notes and the oh so pink 2000 notes, the Reserve Bank of India is soon introducing new fluorescent blue Rs 50 banknotes bearing the motif of 'Hampi with Chariot' that depicts India's cultural heritage.

RBI said it will shortly issue these Rs 50 denomination banknotes in the Mahatma Gandhi (new) series.

"The new denomination has motif of Hampi with Chariot on the reverse, depicting the country's cultural heritage. The base colour of the note is fluorescent blue," RBI said in a release.

Among others, the new notes will have designs and geometric patterns aligning with the overall colour schemes, both at the obverse and reverse, it added.

On the obverse/front side, the note will have portrait of Mahatma Gandhi at the centre, denominational value in Devanagari script, micro letters RBI, India -- both in English and Devanagari -- as well as the numeral "50".

The Ashoka pillar emblem will be on the right side of the obverse and an electrotype watermark and the number panel with numerals in ascending order on the top left side and bottom right side. The new note having dimension of 66 mm X 135 mm will bear the year of printing on the reverse side, a Swachh Bharat logo with slogan, language panel and the motif of 'Hampi with Chariot'.

"All the banknotes in the denomination of Rs 50 issued by the Reserve Bank in the earlier series will continue to be legal tender," RBI added.