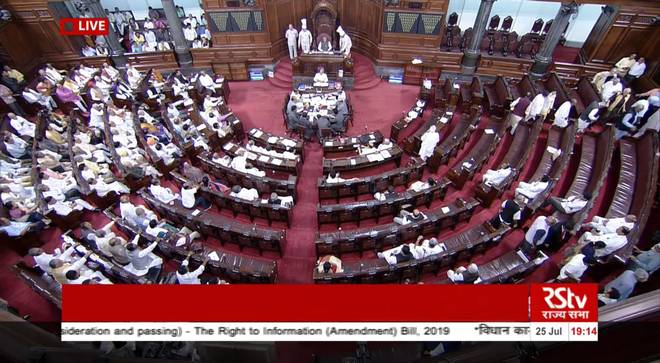 The Rajya Sabha on Thursday passed the Right to Information (Amendment) Bill, 2019 by a voice vote amid a walkout from the Congress, Rashtriya Janata Dal (RJD), Trinamool Congress (TMC) and the other opposition parties. The legislation was passed after the Opposition's proposal to send the RTI Amendment Bill to select committee was defeated with 117-75 in the Rajya Sabha.

The RTI bill was earlier passed in the Lok Sabha on Monday, three days after it was introduced by the government. In the Lok Sabha, 218 members voted in favour of the RTI (Amendment) Bill, while 79 went against the legislation.

The Centre had introduced the bill in the Lok Sabha on Friday to amend the RTI Act, seeking to give the government powers to fix salaries, tenures and other terms and conditions of employment of information commissioners amid vehement protests by opposition members.

Describing the legislation as "clumsy", Minister of State (MoS) in the Prime Minister's Office Jitendra Singh tabled the RTI (Amendment) Bill, asserting it will lead to ease of delivery of RTI Act. He also described it as enabling legislation for administration purposes.

"It is a matter of utmost concern that the central government is hell-bent on completely subverting the historic Right to Information Act, 2005. This law, prepared after widespread consultations and unanimously passed by Parliament, now stands at the brink of extinction," Sonia Gandhi said in the statement.