Chandigarh, Nov 24 -  A SAD-BJP delegation today strongly urged Vidhan Sabha Speaker Rana K P Singh to extend the winter session to debate emergent problems of the State including the friendly match being played by the Congress goverenment against AAP by refusing to present the supplementary challan against leader of oppositon party (LOP) Sukhpal Khaira besides problems of farmers, non implementation of poll promises, introduction of PCOCA act and complete stoppage of all development works in Punjab. 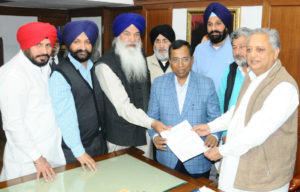 The SAD delegation, which was led by former minister Ajit Singh Kohar and senior BJP leader Som Parkash, asked the Speaker to take note that serious charges had been levelled against Sukhpal Khaira by the lower court which had also summoned him as an accused in a trans border drug case with Pakistani links. It said the State government was yet to present the supplementary challan in the case despite the fact that the high court had upheld the decision of the lower court and even ruled that no vendetta had been done against Khaira. The delegation members also stated that the PSO of Khaira, who was also an accused in the case, had been shifted to the security detail of his brother in law Justice (retd) Ranjit Singh who had been asked to probe the incidents of sacrilege by the Congress government. 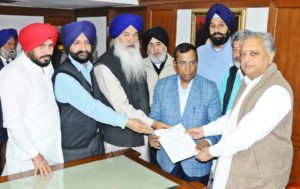 Later briefing newsmen former minister Bikram Majithia said the delegation had asked the Speaker to extend the sittings of the winter session from the present three to at least ten. He said among other things, the SAD-BJP government wanted to discuss the state of  farmers who had been declared NPAs by banks and were not getting fertiliser from cooperative societies because they trusted the governemnt that the loan waiver annunced by it would be implemented. Stating that farmers had not received a penny from the proposed loan waiver, he said  recently in another anti farmer decision, the government had refused to hike the state assured price (SAP) of sugarcane because sugar barons were part of the government. "This amounts to conflict of interest", he said adding a discusion should also be held on why the government had refused to incentivise farmers to stop them from burning paddy stubble besides unfulfilled promises of ghar ghar naukari, unemployment dole and stoppage of all social welfare schemes.

Mr Majithia said the SAD-BJP also wanted the governemnt to make the contents of the proposed PCOCA (Punjab Control of Organised Crime Act) law public. "There is a widespread feeling that this will result in putting constraints on personal freedom and liberty. The government should call an all party meeting to discuss the same besides holding meetings with civil society", he added. He also urged the government to lay the facts in the case pertaining to UK citizen Jagtar Singh Johal before the assembly, saying even UK Prime minister Theresa May had commented on this. "Our image is at stake. We must clarify if any human rights violations have occurred in this case", he added.

The SAD-BJP delegation also demanded a discusion on the sand mafia in the State which was being run by Congress legislators. It said recently a general manager of the mining department had been beaten up and kept illegally in police custody because he tried to check illegal mining. It said sand prices had increased three times but the government was niether checking illegal sand mining or sand prices.

The delegation also noted that the Congress govenrment must tell the august house why all development works had been stopped in towns and villages and why grants sent for the same had been recalled. It said discussion should also be held on the steep increase in power tariff and closure of 800 primay schools.