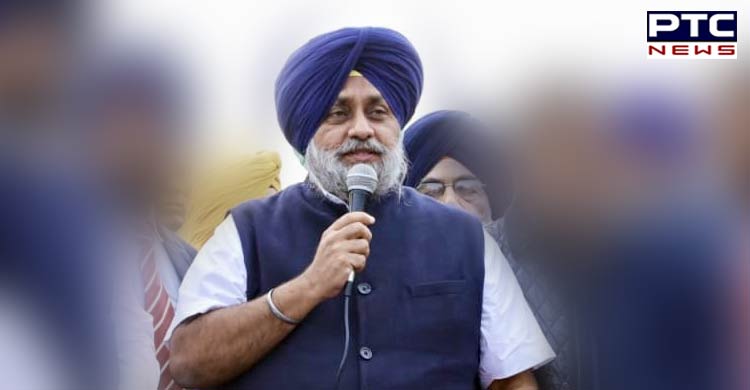 Chandigarh: The Shiromani Akali Dal (SAD) President Sukhbir Singh Badal on Monday demanded registration of a criminal case against cabinet minister Balbir Singh Sidhu for misusing his official position to loot farmers to illegally enrich his family in a change of land use (CLU) case and said a CBI probe was needed to uncover the illegal acts of the Congress leader which caused a huge loss to the State exchequer as well.

In a statement here, the SAD president said a FIR should be registered against Balbir Sidhu for converting agricultural land into industrial and residential land in a completely illegal, arbitrary and malafide manner. “The minister has not only cheated farmers but has also looted the State exchequer by misusing his official power to change the land use of agricultural land into commercial category without complying with the procedure prescribed in the Act”. He said an additional corruption case should also be slapped against the Congress minister for his illegal acts.

Giving details of the case, Mr Sukhbir Badal said the entire exercise of changing the land use of village Manakpur Kalar from agricultural zone to industrial zone was done only in malafide manner to give benefit to the brother of the Cabinet minister. “Land measuring around 68 acres of village Manakpur Kalar was purchased by a firm called Chester Infrastructure Associates in which the minister’s brother Amarjit Singh Sidhu is a partner”. He said the minister exercised his influence over the Town Planning Board to get the status of this piece of agricultural land changed to Industrial land to ensure illegal financial gain to his brother at the cost of farmers as well as the State.

Stating that the land could have been acquired directly from the farmers by the State in case its land use was to be changed, the SAD president said instead of allowing the State to do its job the Congress minister hoodwinked the farmers and State administration to maximize his profits in the deal. “Town Planning board in its 34th meeting held on February 22, 2018, agreed that the agriculture land of village Manakapur Kalar along with the agriculture land of village Kurra and Sekhan Majra be changed from Agriculture zone to residential zone. A public notice was issued for the same on April 12, 2018,” he said adding that in a similar manner, the Master Plan of Banur was amended to alter the change of land use of village Tangori from agriculture zone to a residential zone.

Asking chief minister Captain Amarinder Singh to immediately take stern action against the Congress minister for this big land fraud, the SAD president said, it shows that all mafias- land mafia, sand mafia, and liquor mafia were being run in the state with the open patronage of Congress ministers and leaders. He said that Sidhu must be taken to task for his corrupt practices by being dismissed instantly besides being probed for his illegal acts. He also announced that the SAD would stand by the farmers and assist them in ensuring justice is done in the case.