All the government and private schools in Shimla have been asked to remain closed on Monday owing to heavy rainfall and landslides in the region, by the district administration. 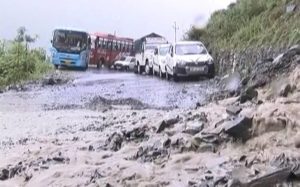 On Sunday, light rain occurred at a few places in the state and the weather department forecast that rain would continue in parts of the state till Independence Day.

Himachal Pradesh: In the wake of heavy rainfall and landslides in the region, all schools in Shimla district to remain closed today.

According to weather department, 15 mm rain was recorded in Hamirpur, followed by 10 mm in Palampur, 8.6 mm in Dharamshala, 4 mm in Dalhousie, 3 mm in Bhuntar, 1 mm in Keylong and 0.2 mm in Sundernagar.

According to the forecast, light to moderate rainfall is very likely to occur at many places in Himachal Pradesh on Independence Day on Wednesday.