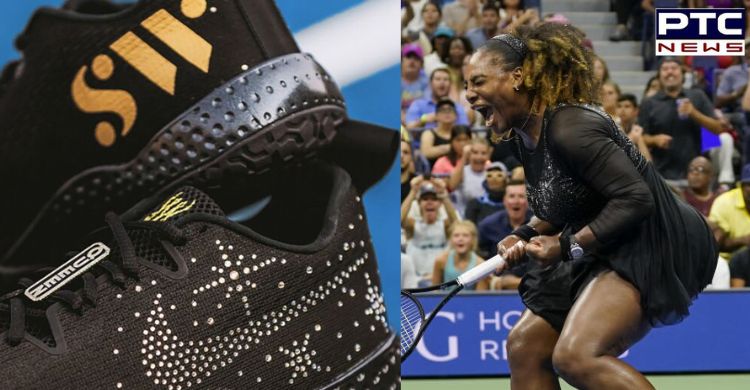 Washington (US), August 30: Serena Williams, who is set to bid farewell to professional tennis, recently made a style statement as she clinched her first-round match in the US Open in New York.

The tennis champion wore a custom Nike outfit created by Williams with a "hands-on approach," according to People magazine.

"Inspired by graceful competition dresses worn by figure skaters, the embellished bodice and the skirt place Serena in the spotlight and allow her freedom of movement," the brand said while mentioning the outfit's details in a statement.

The set's matching jacket and tote bag splashed in a deep midnight hue, and its light-refracting "crystal-encrusted bodice" mirrored the starry night sky, under which Williams played her match against Danka Kovinic on Monday.

According to People magazine, the 23-time Grand Slam champion entered the court wearing a pair of customised NikeCourt Flare 2 sneakers with a "diamond-encrusted Swoosh design and her initials on the medial side" and gold lace deubres embellished with "400 hand-set diamonds in black ceramic created in collaboration with Serena Williams Jewelry."

Williams defeated Montenegrin Danka Kovinic, who is ranked 80th in the world, 6-3 at the US Open yesterday. With this triumph, the 40-year-old also maintained an astounding 21-0 victory run in first-round matches.

The crowded Arthur Ashe Stadium erupted in cheers for the 23-time Grand Slam singles champion, with many holding signs that read "We love Serena."

According to the Washington Post, Williams earned a standing ovation after the match and remained on the court for the US Open's video tribute narrated by Oprah Winfrey.

As per People magazine, the 40-year-old revealed earlier this month in an essay published in Vogue magazine that she will likely retire from tennis after the US Open.