Sukhbir Singh Badal and Union Minister for Food Processing, Harsimrat Kaur Badal on Saturday have wished the luck to the Bir Khalsa group who have made it to the biggest talent hunt platform- America’s Got Talent. Shiromani Akali Dal including the Supremo Sukhbir Kaur Badal and wife Harsimrat Kaur Badal, along with her brother Bikram Majithia addressed the media and asked for the people to vote for Bir Khalsa group who are going to perform on America’s Got Talent, on August 13, 2019.

The voting lines for Bir Khalsa will be open till August 14, 2019. Hence, Harsmirat Kaur Badal has appealed to vote for them, as they are the only Punjabis to reach on such a platform.

So, far in America’s Got Talent, the Bir Khalsa group has stunned the judges, right from the first round. This is the season 14, of NBC’s America’s Got Talent in which Simon Cowell, Julianne Hough, Gabrielle Union, Howie Mandel, are the judges while host Terry Crews is in their talent search, showcasing unique performers from across the country. 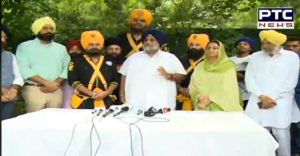 In the second round, the tallest guy shocked the judges which forced Dwayne Wade to come on the stage and compare his height with him. Bir Khalsa is going phenomenally in the reality show, in fact, Simon Cowell is impressed too.