Mumbai, Nov 13- Panic gripped passengers of a Bengaluru-bound IndiGo flight from Thiruvananthapuram after cabin crew noticed smoke emanating from a hand baggage, which was quickly put out with a fire extinguisher, the airline said today.

The incident, which occurred last Saturday, has been reported to the aviation regulator – the Directorate General of Civil Aviation (DGCA), it said.

“IndiGo crew operating flight 6E-445 from Thiruvananthapuram to Bengaluru noticed the smoke in the cabin. The crew quickly identified minor sparks coming from the hat-rack of seat 24RH and immediately informed the commander,” a spokesperson said in a statement to PTI.

The Airbus A320 aircraft, carrying 186 passengers and six crew, made a normal landing, an IndiGo spokesperson said.

Taking precautionary measures, the cabin crew, on priority bais, relocated all passengers from adjacent seats, airline said, adding smoke coming out of a black laptop placed in the hand baggage was put out with a fire extinguisher.

The laptop was then transferred into a container filled with water in the lavatory, the airline said.

The aircraft made a normal landing at Bengaluru airport were all passengers were deplaned safely, the statement said. PTI 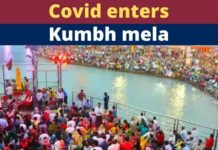