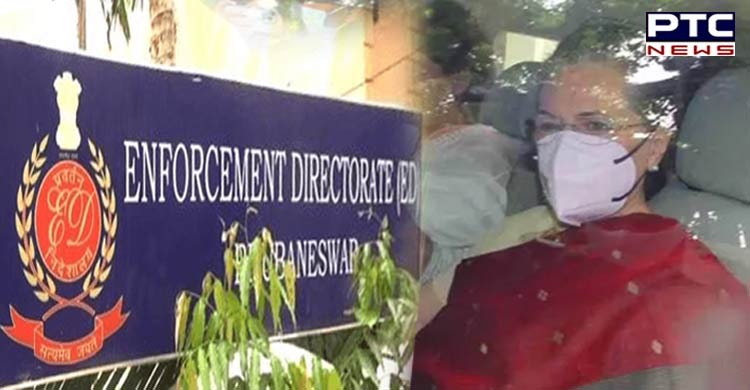 New Delhi, July 26: Congress interim president Sonia Gandhi reached the Enforcement Directorate (ED) on Tuesday for her second round of questioning in the money laundering case related to the National Herald newspaper.

The senior Congress leader was accompanied by Priyanka and Rahul Gandhi.

Meanwhile, the members of the All India Mahila Congress protested over the ED's summons at the party headquarters. The party had initially planned to demonstrate in Rajghat but was unable to obtain permission from the authorities.

Furthermore, heavy security has been deployed outside the All India Congress Committee (AICC) headquarters.

Earlier, as many as 349 Congress members were detained outside the party office during the protests last week. Senior leaders Shashi Tharoor, Ashok Gehlot, Sachin Pilot, Pawar Khera and Randeep Singh Surjewala were among those detained.

On July 21, the ED questioned Sonia Gandhi for around two hours. The Congress chief's daughter - party leader Priyanka Gandhi Vadra had accompanied her to the ED office. According to sources, the Congress leader was asked over two dozen questions "after which she asked to go home for her medication".

During the earlier round of questioning, the probe agency kept two doctors and an ambulance on standby as a humanitarian gesture. The ED also permitted Priyanka Gandhi Vadra at its office.

The ED had summoned Sonia Gandhi to appear on June 8 in the case for the first time, however, she could not appear after testing positive for Covid- 19.