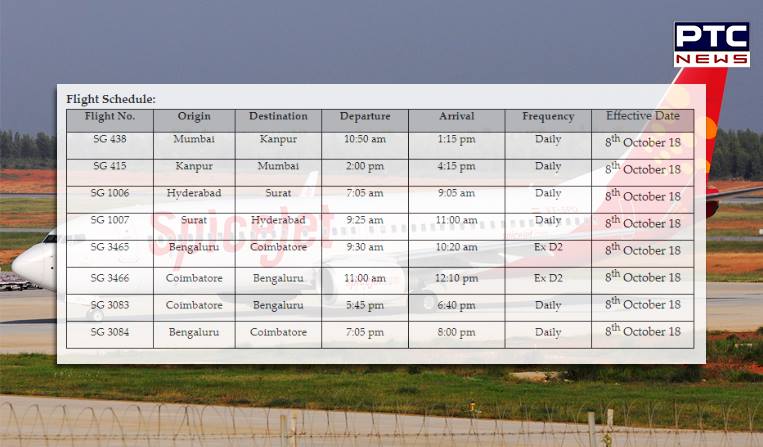 SpiceJet today announced the launch of eight new domestic flights that will start from October 8.

The airline will connect Kanpur with Mumbai with a daily direct flight and introduce new direct flights on the Bengaluru-Coimbatore sector.

An all-inclusive promotional offer has been introducted by SpiceJet that begin at Rs 4,099 for travel to Mumbai from Kanpur and Rs 4,198 for travel to Kanpur from Mumbai for a limited period.

Meanwhile, the promotional fare on Coimbatore-Bengaluru route can be availed from Rs 2,199 and on Bengaluru-Coimbatore sector the fares start at Rs 2,409.Deploying a mix of its fleet of Boeing 737 and Bombardier Q-400 aircraft on the routes, the airline will strengthen its network across north, south and west India.

Shilpa Bhatia, chief sales and revenue officer, SpiceJet, said: “We see immense potential in the new routes we announced today. We are proud to be the only Indian carrier to provide a direct connectivity between Mumbai, the country’s financial capital, and Kanpur, regarded as the commercial capital of Uttar Pradesh and one of the major industrial hubs of the country. This new flight reiterates our commitment to increasing air connectivity to the city of Kanpur.

The press release said, ”All the new flights introduced will be operational daily, whereas the evening flight on the Coimbatore-Bengaluru route will fly on all days except Tuesday. SpiceJet has been pitching for more flights to non-metros and smaller cities from major airports in the country. With the new flights, passengers from small towns like Kanpur, Surat and Coimbatore could travel to a host of other cities both on SpiceJet’s domestic as well as international network via multiple onward connections from key metros."