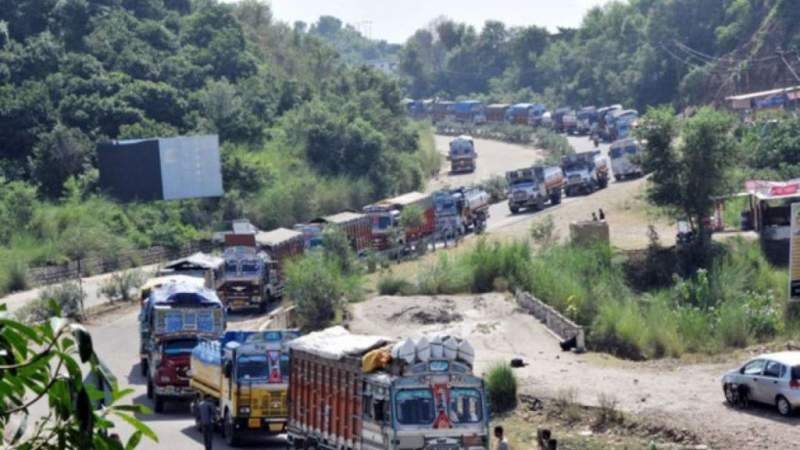 Nearly 2,000 civilian vehicles, which were left stranded on Jammu-Srinagar national highway following a massive landslide, were cleared as the two-day per week ban on movement of civilian vehicles on the only all-weather road linking Kashmir with rest of the country came into effect on Sunday, officials said.

The governor administration last week announced a ban on civilian traffic on the 270-km highway on Sundays and Wednesdays to facilitate safe passage of security convoys till May 31, a decision which was criticised as "anti-people" and "undemocratic" by almost all political parties and cross-section of the society including business community in the valley.

"The highway was cleared of the debris around 3 am after hectic 14-hour long operation and accordingly, the stranded vehicles were allowed to move towards Jammu," Deputy Superintendent of Police, traffic (National Highway, Ramban), Suresh Sharma said.

He said it was decided that the stranded civilian vehicles, both trucks and passenger vehicles, would be cleared first before the highway is closed for the civilian traffic to ensure smooth passage of the security convoys.

However, the officer said no fresh civilian traffic was allowed either from Srinagar or Jammu since this morning in view of the restrictions which are in force from 4 am to 5 pm.

"The security convoys started moving from both sides to reach their destinations," Sharma said.

Army, police and CRPF personnel have been deployed at all intersections leading to the highway to ensure that civilian traffic does not interfere with movement of convoys of security forces, officials said.

Amid public outrage against the curbs, the authorities earlier clarified that patients, students, tourists and others in emergency will be allowed to move after scrutiny during the restrictions.

Meanwhile, authorities gave permission to a wedding party to travel on the highway from Anantnag district in south Kashmir to Doda district in Jammu region.

The order issued by the Additional District Development Commissioner, Anantnag, said the wedding party of Danish Ali will include 12 other people who will travel on Sunday in four vehicles on the highway and their travel would be subject to frisking and checking by the security forces.

The permits issued also specified the registration numbers of the vehicles. PTI