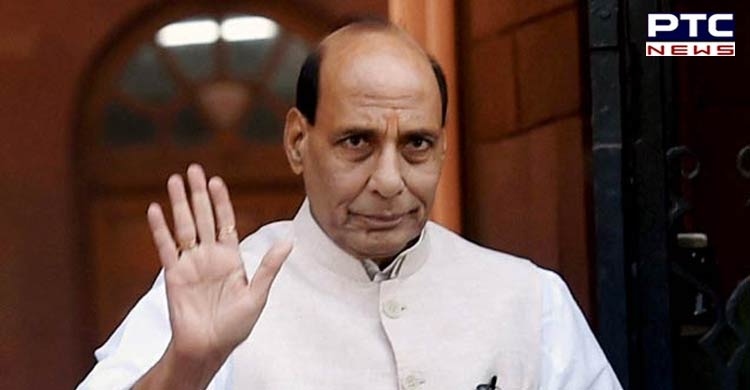 Jammu, June 17: Defence Minister Rajnath Singh, who is on a two-day visit to Jammu and Kashmir, on Friday indicated that assembly elections could be held in the Union Territory by the end of this year.

Recently, a delimitation exercise was accomplished after the abrogation of Article 370 from the then state of Jammu and Kashmir. As per the order, out of the 90 Assembly Constituencies (ACs) in the Jammu and Kashmir, 43 will be part of the Jammu region and 47 for the Kashmir region. Addressing an event here, Singh said: "Recently, the delimitation exercise concluded in J-K. Now, Jammu will have 43 seats and Kashmir will have 47 seats in Vidhan Sabha. There is a strong possibility that the electoral process will commence by the end of this year in J-K."

Singh once again lashed out at the "neighbouring country" Pakistan, for attempting to "break the social fabric" of the region and added that Pakistan is sowing seeds of hatred in India.

Recently, a spate of targeted killings had broken out in the region following which there were reports of the Kashmiri Hindus leaving the Valley due to fear.

"I appeal to the people here that the social fabric of Jammu and Kashmir should never break rising above religion, caste. There are some forces here which have always tried to break this social fabric and promoted the radicals. Recently, attempts were made again to ignite hatred in J-K. There is an important role of our neighbouring country in sowing the seeds of hatred here. From the attacks of 1947 to the recently conducted targeted killings, there is a foreign conspiracy behind all of these. We won't let forceful migration take place of any community from Jammu and Kashmir," he said.

On Thursday the defence minister had while addressing security forces in Baramulla district said that Pakistan was continuously trying to disturb peace in J-K through its approach of "bleed India with a thousand cuts".

"Our neighbour has always resorted to anti-India activities. The state also witnessed terror activities in the past. Due to the relentless efforts of the personnel of the Armed Forces, BSF, CRPF and Jammu and Kashmir Police, there has been a significant decline in the number of terror activities in the state recently. Pakistan continuously tries to disturb peace in the country through its approach of bleed India with a thousand cuts. But, our security forces are such a protective shield for this country that whoever tries to break it, bleeds himself. The nation has immense faith in our forces who are always ready to deal with any situation," he said.

Meanwhile, addressing an event held here today to mark the 200th anniversary of Mahararaja Gulab Singh 'Rajyaabhishek ceremony', the defence minister hit out at Pakistan for the illegal occupation of Pakistan Occupied Kashmir and Gilgit-Baltistan and said that it was never made a part of the Pakistani Constitution unlike India's where the entire Jammu and Kashmir is a part of the country.

"In 1947, when India was divided, a large chunk of the region was captured illegally before the accession of Jammu and Kashmir. Even today, Pakistan Occupied Kashmir, Gilgit-Baltistan is under the illegal occupation of Pakistan. The areas which Maharaja Gulab Singh had added in Jammu and Kashmir are being claimed by Pakistan as theirs," he said.

"The truth is that Pakistan has no locus-standi in these areas. If this were so, then in 1956, 62, 72, and 73, when Pakistan's Constitution was made, Gilgit-Baltistan was never mentioned as a part of Pakistan. Whereas, we have only one Constitution in which it is mentioned clearly that PoK, Gilgit Baltistan are inseparable parts of India and resolution for the same was passed in both the Houses of the Parliament," the Defence Minister added.

Singh also mentioned Article 370 of the Constitution, which was abrogated in August 2019, and said that the people "had sensed the problems created due to this seclusion a long time ago".

"If Jammu and Kashmir were merged to India after Independence, then Article 370 of the Constitution which kept the region secluded and the people here had sensed the problems created due to this seclusion a long time ago," he said.

"The people of Jammu and Kashmir protested for the betterment of the region for seven decades. We lost our leader Shyama Prasad Mukherjee. Despite all protests and efforts, Article 370 was not scrapped due to vote bank politics. On August 5, 2019, Article 370 was scrapped by both the Houses of the Parliament and the Constitutional distance from India was ended," Singh alleged.