Suhe Bullan Waliye Poster: The much-awaited second song of the upcoming film Jaddi Sardar is all set to release tomorrow only on PTC Punjabi and PTC Chakde. Jaddi Sardar is the upcoming film which revolves around the story of two brothers and their unconditional love for each other. The film is all set to release on September 06, 2019. Surely, the film is creating the buzz, and likewise, the song is going to boost the excitement level of Jaddi Sardar with Suhe Bullan Waliye. 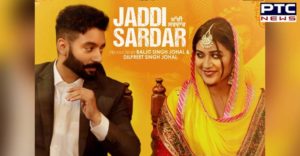 Earlier, the first song of the film Hakumtaan was released and the song created a nice turnout in term of interaction. On YouTube, the song Hakumtaan garnered 1,381,685 views within three days of the release. Helmed by Manbhavan Singh, the Jaddi Sardar film is featuring Sippy Gill, Dilpreet Dhillon, Guggu Gill, Sawan Rupowali in the pivot roles. The film will be released on September 06, 2019.