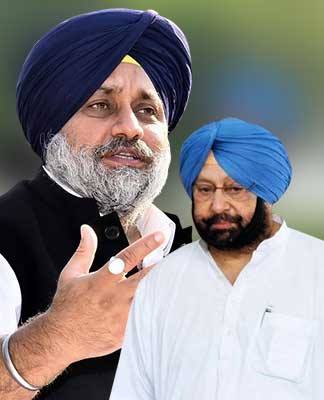 Shiromani Akali Dal (SAD) president Sukhbir Singh Badal today told chief minister Capt Amarinder Singh to unmask his cabinet colleague who had outraged the modesty of an Indian Administrative Service (IAS) woman officer by sending her indecent messages and asked why he as well as Congress president Rahul Gandhi were dragging their feet in taking action against the minister.

Also Read: 'This was an attack on behest of ISI who are anti-India,' Sukhbir Badal on Manjit GK attacked in US

In a statement here, the SAD president said as per media reports no action was been taken against a cabinet minister who had sent indecent messages to a woman IAS officer more than one and a half months back. This, the media reports said, was despite the fact that the IAS officer had brought the matter to the notice of her superior officers and even the chief minister. “The chief minister must immediately tell the people why he is trying to cover up this heinous act by first naming and shaming the minister and then taking concrete action against him by sacking him from the State cabinet”.

Mr Badal said it was shocking that even Rahul Gandhi, who has been apprised about the incident, has kept silent on this issue for more than one month. “Rahul Gandhi should explain whether he is complicit in this cover up exercise along with the Punjab chief minister? There is no way a minister accused of such abhorrent behavior can sit in a cabinet where decisions regarding safety of women have to be taken. If he is not removed immediately it will be perceived the top Congress leadership is not serious about protecting the honour of women”.

Mr Badal said the incident also exposed the double face of the Congress party as well as Rahul Gandhi. “The Congress and Rahul Gandhi demanded Mr M J Akbar’s resignation from the union cabinet after the latter was accused of sexually harassing women journalists in his role as an Editor, but has been actively sheltering someone for similar transgressions committed by him as a cabinet minister”.

Asking the chief minister and Rahul Gandhi not to adopt double standards, Mr Sukhbir Badal said the woman IAS officer should be encouraged to register a formal complaint against the minister. “This will pave the way for other women who do not have access to the chief minister to register their protest to come forward”.

Underlining the importance of the minister’s immediately dismissal, the SAD president said there were several aspects to the case. “First and foremost is the need to give justice to the IAS officer whose dignity has been violated by the minister. The second is to send out a clear message that such transgressions will not be tolerated however high and mighty the perpetrator may be. Lastly this is also an issue of governance. What message is the chief minister giving to the people by holidaying in Turkey at a time when the State needs to give justice to the Amritsar Dussehra tragedy victims as well as the woman IAS officer? The delay in taking action in the case by the CM has already sent a message to Punjabis that women are not safe in Punjab”, Mr Badal added.