The Haryana Public Service Commission has come out with an order that no candidate will be allowed to carry religious symbols in the examination centre. The examination is slated to be held tomorrow.

In a statement here, the SAD president said religious symbols including the kada, kangha and sri sahib were an inalienable part of the Sikh religion and no Sikh should be asked to part with the same during any examination. “The Haryana Public Service Commission is expected to be aware of this considering the large population of Sikhs in Haryana. It should be directed not to disrespect the Sikh community and hurt its sentiments by passing such arbitrary and uncalled for orders”, Mr Badal added.

The SAD president also brought it to the notice of the Haryana chief minister that Article 25 of the constitution safeguarded the rights of all citizens to profess and practices the tenets of their faith. He said this right had been repeatedly upheld by various courts also. “Keeping these facts in view I request you to direct the Haryana Public Service Commission to rescind its notification and allow Sikhs as well as candidates belonging to other religions to sport symbols of their faith during all examinations”, he added. EOM 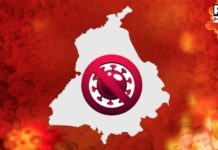