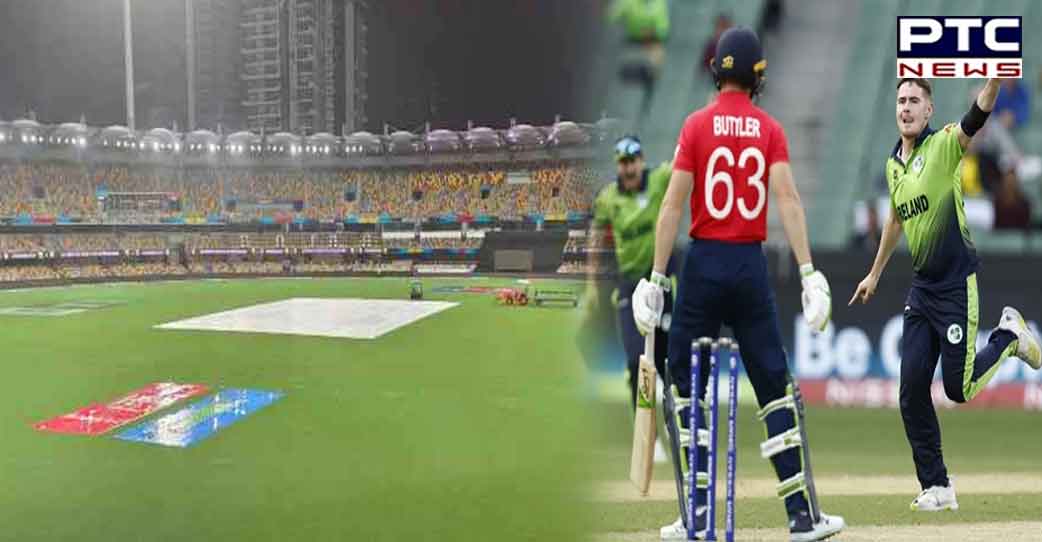 Dawid Malan started off playing some good shots, but England lost yet another star batter as Ben Stokes' stumps were castled by medium pacer Fionn Hand for just 6 off 8 balls. The former champions were reduced to 29/3.

Malan was joined by youngster Harry Brook and both took England through the remainder of the powerplay safely. In six overs, England was at 37/3, with Malan (15*) and Brook (3*) at the crease.

In the 11th over, Ireland missed two great chances to strengthen their hold on the match by dropping Brook and Malan in two consecutive balls. However, Gerath Delany undid the damage caused by catching Brook for 18 off 21 balls, breaking the 38-run stand between Brook and Malan. George Dockrell got his first wicket of the match.

All-rounder Moeen Ali joined Malan at the other end and two southpaws had to guide England towards another victory.

Malan, who had been holding together England's innings till this point, was dismissed by Barry McCarthy for 35 off 37 balls after being caught by Fionn Hand. Half of the English batting lineup was back in the hut for 86/5.

Rain interrupted play at this point. England were 5 runs behind the par score of 110 as they had scored 105/5 in 14.3 overs, with Ali (24*) and Livingstone (1*). The action could not start and rain exceeded the cut-off time.

As a result, Ireland won the match by five runs.

Little (2/16) was the pick of the bowlers for Ireland. McCarthy, Hand and Dockrell took one wicket each.

Earlier, fiery spells by Liam Livingstone and Mark Wood helped England bundle out Ireland for 157 in Super 12s of the ongoing T20 World Cup 2022 in Melbourne on Wednesday.

Put to bat first, Ireland got off to a bad start as they lost the crucial wicket of opener Paul Stirling. Mark Wood gave his team a big breakthrough as he dismissed danger man Stirling, who hit the ball straight into the hands of Sam Curran.

Lorcan Tucker then came out to bat. In the 4th over, he slammed Chris Woakes for 11 runs hammering two fours in the over.

Tucker continued his blistering form and took Sam Curran for 14 runs in the 6th over of the innings. Tucker along with Ireland's skipper guided the team to 92/1 at the halfway stage of the game. Balbirnie also shifted gears and slammed Chris Woakes for 18, slamming two fours and one six.

Tucker's stint at the crease was cut short when he was run out at the non-striker's end, with Adil Rashid deflecting the ball to the stumps off a drive from Andrew Balbirnie. Tucker went back to the pavilion, after scoring 34 runs in 27 balls, in the 12th over of the innings.

Harry Tector then came out to bat, but could not do much as he was dismissed by Mark Wood without scoring runs.

Curtis Campher then joined hands with Balbirnie to keep the moumentum going. Ireland skipper Andrew Balbirnie brought up his half-century in 40 balls.

In the 16th over of the innings, Liam Livingstone struck twice to dismiss well-set batter Balbirnie for 62 runs and new batter George Dockrell for a duck.

At this point, Ireland kept losing wickets at regular intervals. Sam Curran then gave Ireland a double blow as he dismissed Barry McCarthy for three runs and Fionn Hand for one.

Ben Stokes then bundled out Ireland for 157 as he dismissed Joshua Little for a duck.