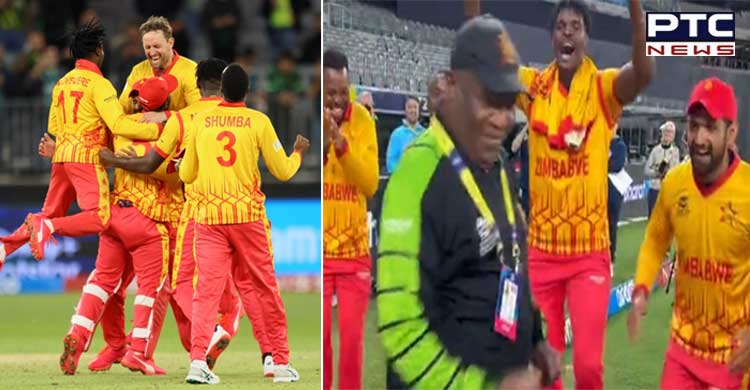 Viral video of Zimbabwe players dancing: Zimbabwe players were seen celebrating in their own unique style after defeating Pakistan by one run at the Optus Stadium in Perth in the T20 World Cup 2022.

In a nail-biting T20 World Cup match on Thursday, Zimbabwe punched above their weight and defeated Pakistan by one run. Zimbabwe stifled Pakistani batters and picked up wickets at regular intervals to stop their fancied foes at 129 for eight.

When Shaheen Shah Afridi took a strike, Pakistan needed three runs off the last ball. Despite slamming the bowler hard, he was unable to complete the two runs needed for a tie. This meant Zimbabwe finished a famous win and won their first group match in this year's T20 World Cup after splitting points with South Africa in a washout.

After the famous win, they broke into a unique dance move, a video of which is going viral all over the internet.

I love this dance spell too of #Zimbabwe Cricket Team after winning over #Pakistan #PAKvsZIM @CricketZimbo @TheRealPCB https://t.co/rhrCZ72kim

Zimbabwe stunned Pakistan with a one-run win on Thursday, endangering the Asian giants with an early exit from the Twenty20 World Cup.

The excitement lasted until the very last ball, when Zimbabwe defeated Pakistan by a last-ball victory, with Pakistan's Shaheen Afridi losing his wicket at the last moment. With that, Zimbabwe, which scored 130-8 after electing to bat first, defeated Pakistan by 129 runs in Perth.