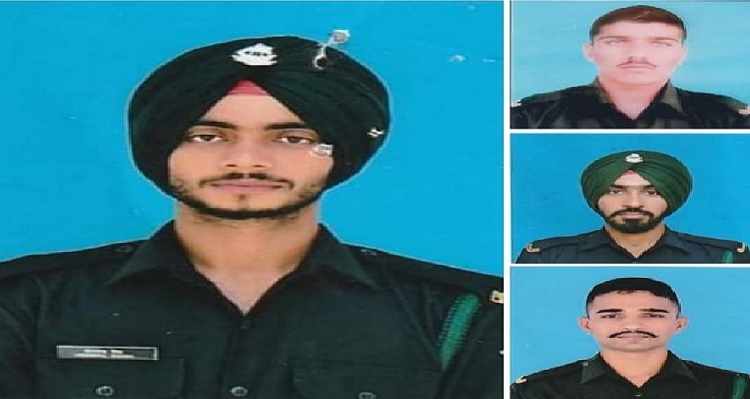 Punjab Latest News: In a major incident, four Indian soldiers and two porters died after trapped in snow for hours after an avalanche hit Army position in northern Glacier on Monday. Among the four soldiers, three of them were from Punjab. They have been identified as Naik Maninder Singh, Ajnala, Amritsar, Sepoy Dimpal Kumar, Mukerian, Hoshiarpur, Sepoy Veerpal Singh, Malerkotla, Sangrur and Sepoy Manish Kumar, Solan, Himachal Pradesh.

The soldiers were among the patrolling group of eight. The defence officials stated that they died due to extreme hypothermia. The incident took place at 3 pm in the northern glacier at an altitude of 19,000 feet.

The Indian Army launched a rescue operation to bring back the trapped soldiers. All the soldiers were pulled out of the debris, in which seven were critically injured. These soldiers were evacuated through helicopters to the nearest military hospital, where they are undergoing treatment.

Meanwhile, the Defence Minister Rajnath Singh paid tributes to the soldiers who died on Monday. He said, "Deeply pained by the demise of soldiers and porters due to avalanche in Siachen. I salute their courage and service to the nation. My heartfelt condolences to their families."

The Siachen Glacier is at the height of around 20,000 ft in the Karakoram range. It is also known as the highest militarised zone in the world. During the winters, avalanches and landslides are very common at the glacier. The temperature at such glaciers can drop to  as low as minus 60 degree Celsius.