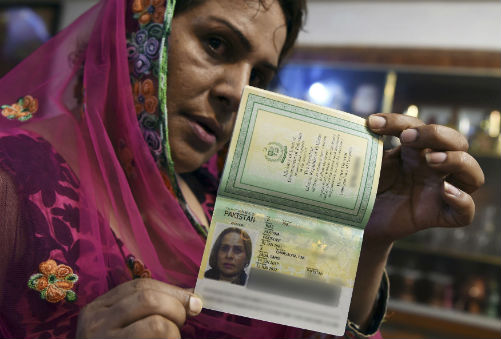 The transgender community of Pakistan's northwestern Khyber-Pakthunkhwa province has moved the court seeking voting rights as well as rights to contest polls in the upcoming general elections.

A writ petition was filed by Farzana Jan, President, and Arzu Khan, General Secretary, of TransAction (Provincial Alliance of Transgender and Intersex Community), Khyber-Pakhtunkhwa under Article 199 of the Constitution of Pakistan.

The TransAction Alliance has demanded that the Election Commission must formulate viable strategy to facilitate transgender community in the electoral process as voters and candidates in the 2018 general elections.

It has also sought creation of a column of transgender and intersex community in the electoral nomination form so that transgender community is also able to contest election in an inclusive manner.

The petition also asked the Election Commission to specify as to which polling station the transgender community would approach for voting.

The petition requests the High Court to give direction to the Election Commission that transgender community should be given a right of priority voting at the polling booths and without standing in queues.

It requested the court to direct provincial election commission offices to give special attention and consideration in registering votes of the transgender community.

The National Database & Registration Authority is issuing Computerized National Identity Cards with 'X' category to transgender community; therefore, the Election Commission of Pakistan should specify as to which polling station the transgender community would approach for voting," Farzana said.

"Being citizens of Pakistan, the petitioners cannot be thrown-out from voting and contesting election as these are fundamental rights guaranteed under the Constitution," Farzana added.

Qamar Naseem, Program Coordinator of Blue Veins and also a member of the Chief Minister Special Community on Rights of the Transgender Persons and member of the National Task Force, said the political empowerment of transgender community will not only give them a fair chance to be their own voice, but also bring their best out in the form of representatives to hold offices, which will groom them as political workers.

"The political parties are also requested to give them space and acknowledge their efforts. Once this community is groomed, it will be an asset for the country," Naseem said.

Arzu Khan, General Secretary of the TranAction Alliance, said the respondents have taken no concrete actions to include transgender community in the upcoming electoral process as voters as well as candidates and that delay by respondents to rectify/correct the nomination forms amounts to denial of the fundamental right of the petitioner.

Taimur Kamal, Coordinator of the Pakhtunkhwa Civil Society Network, said the petitioners are not treated in accordance with law; thus, respondents are violating the fundamental rights of the petitioners guaranteed by the Constitution of Pakistan.

Gul Rehman Mohmand, an advocate at the Peshawar High Court who is pleading the case on behalf of the TransAction, said the right to vote and contesting elections is the fundamental rights of all Pakistanis without any discrimination.

"I am hopeful that the transgender community will get justice and relief from the court and their fundamental rights will be protected as per constitution," Rehman said. PTI