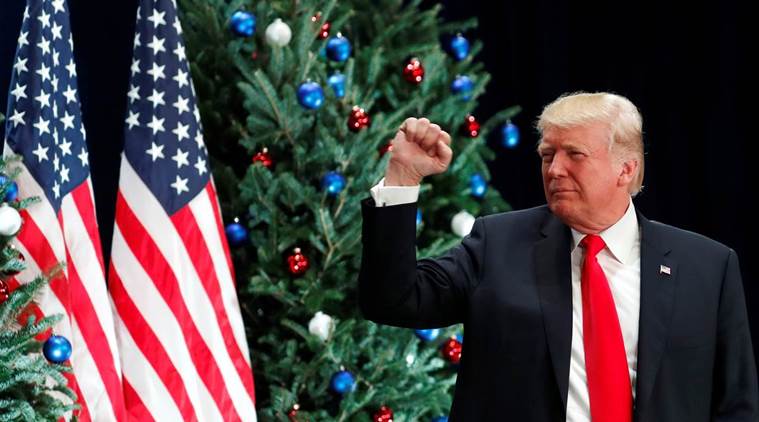 The bill lowers tax rates for individuals and families till 2025 and permanently cuts corporate tax rates from 35 per cent to 20 per cent.

The House of Representative has already passed the bill.

The two versions of the bill would now have to be reconciled before it can be sent to the White House for Trump to sign into law.

"Biggest Tax Bill and Tax Cuts in history just passed in the Senate. Now these great Republicans will be going for final passage. Thank you to House and Senate Republicans for your hard work and commitment!" Trump said in a tweet.

"Look forward to signing a final bill before Christmas," he added.

"The administration looks forward to working with Congress to fulfil the promise we made to deliver historic tax cuts for the American people by the end of the year," White House Press Secretary Sarah Sanders said in a statement, adding that the president applauded the Senate for passing the Tax Cuts and Jobs Act.

"The policies in this bill will cut taxes for hardworking families and put our economy on a path of sustainable economic prosperity and job creation. We have a once-in-a-lifetime opportunity to reclaim America's great destiny," Sanders said.

Passed by the Senate on partisan line of 51-49 votes, the bill also touches other Republican goals, including opening the Arctic National Wildlife Refuge to oil drilling and repealing the mandate that individuals purchase health insurance, which would punch a sizable hole in the 2010 Affordable Care Act, the Wall Street Journal reported.

"The bill's ultimate passage would mark a legislative victory for President Donald Trump and his fellow Republicans," the daily reported.

"Mr Trump has made the tax overhaul a centrepiece of his economic policy goals, focusing on a rewrite of business taxes, which he has argued make the US uncompetitive internationally. The bill could also give lawmakers something to campaign on in the 2018 midterm elections," it said.

US Chamber of Commerce President and CEO Thomas J Donohue applauded the senators for advancing a legislative package that will grow the economy, create jobs, and allow middle- class Americans to keep more of their hard-earned money.

"This bill will encourage investment here in the United States as businesses hire workers, expand facilities, and buy new equipment," he said.

Commending the Senate for this historic action, House Speaker Paul Ryan said for the first time since 1986, both the House and the Senate have passed a major overhaul of the nation's tax code.

"Now we will move quickly to a conference committee so we can get a final bill to President Trump's desk. The hardworking people of this country are counting on us to deliver real relief," he said.

"That means more jobs, faster economic growth, bigger paychecks, and a tax cut for Americans from all walks of life. These opportunities only come around once in a generation, and now it is time for us to seize this moment," Ryan said. PTI