Turncoats rewarded with candidature for UP Legislative Council polls by BJP 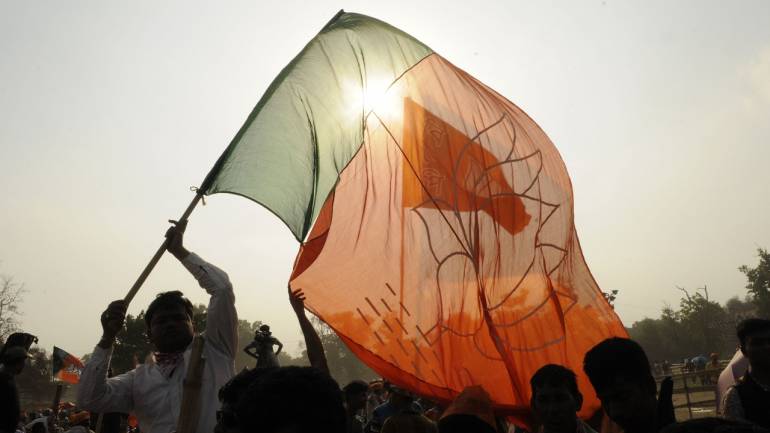 Turncoats rewarded with candidature for UP Legislative Council polls by BJP

Four political turncoats, who had resigned from their membership in the Uttar Pradesh Legislative Council last year to facilitate Chief Minister Yogi Adityanath, his two deputies and two other cabinet colleagues to get the membership of the Upper House of the state Legislature, were today named by the BJP as its candidates for the upcoming Legislative Council polls.

In a statement issued on sunday, the party announced the names of 10 candidates for the April 26 polls.

Kataria, Sonkar and Pathak are general secretaries of the state BJP unit, while Dhawan, a former MLC, hails from Varanasi.

Meanwhile, Apna Dal (Sonelal) spokesperson Arvind Sharma, in an official statement, said, "The president of Apna Dal (Sonelal), Ashish Singh Patel, will be the candidate for the 11th seat left by the BJP for the party."

In September last year, Adityanath, his two deputies and two ministers were declared elected unopposed to the state Legislative Council. No other candidate was in the fray for the bypolls to the five seats in the Upper House.

The chief minister had filed his nomination for the seat vacated by Samajwadi Party (SP) member Yashwant, while Deputy Chief Minister Keshav Prasad Maurya had filed his papers for the seat held by SP member Bukkal Nawab. Their term was to expire in July, 2022.

Adityanath had taken over as the chief minister on March 19 last year. He had to become a legislator within the stipulated six months since assuming office.

Raza, the only Muslim minister in the Adityanath cabinet, had filed his nomination for the seat vacated by BSP member Thakur Jaiveer Singh.

Bajpai was recently elected as a Rajya Sabha member from Uttar Pradesh.

Meanwhile, the leaders of the ruling BJP sounded confident of bagging 11 of the 13 seats going to the polls on April 26.

The BJP and its allies enjoy a brute majority of 324 in the 403-member state Assembly. Arithmetically, they are likely to win 11 of the 13 seats comfortably and still be left with some additional votes.

"We are sure of winning 11 of the 13 Legislative Council seats going to the polls," state BJP spokesperson Navin Srivastava told PTI.

Of the remaining two seats, the SP has given up one to the Bahujan Samaj Party (BSP).

The SP, headed by Akhilesh Yadav, had fielded two candidates, but withdrew one of them, paving the way for Mayawati's party to contest one seat as a quid pro quo (a favour or advantage granted in return for something) for her support to the SP in the bypolls to the Gorakhpur and Phulpur Lok Sabha seats, which halted the saffron party's victory march in the bastion of Adityanath (in Gorakhpur).

In the 2014 Lok Sabha polls, the BJP had won the Phulpur seat for the first time.

In the recently-concluded Rajya Sabha polls, it was a sweet revenge for the BJP as it ensured the victory of all its nine candidates, days after it lost the two crucial Lok Sabha seats to the SP.

Besides Union Finance Minister Arun Jaitley, the others who had made it to the Upper House of Parliament from the party were Ashok Bajpai, Vijay Pal Singh Tomar, Sakal Deep Rajbhar, Kanta Kardam, Anil Jain, Harnath Singh Yadav, GVL Narasimha Rao and Anil Kumar Agarwal, who pulled off a surprise win with the help of second-preference votes.

The other candidates, including the SP's Jaya Bachchan, had won on the basis of first-preference votes.

In the 100-member Uttar Pradesh Legislative Council, the BJP has only 13 representatives, the SP 61, the BSP nine, the Congress two, the RLD one and others 12. Two seats are vacant.

"The SP is contesting from one seat in the Legislative Council polls. Initially, we had decided to contest from two seats, but later we decided to give one seat to the BSP to strengthen our electoral understanding," he added.

According to the Election Commission (EC), the tenure of 13 MLCs, including SP national president Akhilesh Yadav and two ministers in the Adityanath government -- Mahendra Kumar Singh and Mohsin Raza -- will end on May 5.

Of the 13 seats falling vacant, seven were held by the SP, two each by the BJP and the BSP and one by the RLD. The 13th seat, which was held by former SP minister Ambika Chaudhary, fell vacant when he switched over to the BSP.

Apart from the SP chief, six other MLCs from the party, whose terms are coming to an end are its state unit chief Naresh Chandra Uttam, senior spokesman Rajendra Chaudhary, Umar Ali Khan, Madhu Gupta, Ramsakal Gurjar and Vijay Yadav.

The MLCs of other parties, whose terms end on May 5, are Vijay Pratap and Sunil Kumar Chittor (both from the BSP) and Chaudhary Mushtaq, the lone RLD member.

Though the ruling NDA has 324 MLAs in the 403-member state Assembly, it may not get the required strength in the Upper House to get the bills passed, even after winning 11 of the 13 seats.

During the winter session of the state legislature last year, the Adityanath government had suffered an embarrassment when it failed to ensure the passage of the Uttar Pradesh Control of Organised Crime (UPCOC) Bill in the Upper House. PTI