New Delhi, Jan 1 –  Two members of an international drug cartel have been arrested, leading to seizure of 3.5 kg of high-grade heroin having an estimated value of around Rs 15 Cr, police said today.

A team of Special Cell of the Delhi police acting on a tip off caught Ravi Shankar (50) and Vikas (30) near Sherawala Gurdwara on Outer Ring Road, on December 27, said PS Kushwah, DCP (Special Cell).

The drug is estimated to have a value of Rs 15 Cr in the international market, the officer said.

Shankar has been found previously convicted for 20 years in two cases registered against the NDPS Act, Kushwah said.

Both the accused, residents of Hoshiarpur, revealed during interrogation that they received heroin from persons of African-origin residing in the area of New Mahavir Nagar, he said.

“Supplier of Heroin in this case has been identified. He was introduced to Shankar by a fellow Nigerian woman, who is lodged in Kapurthala Jail, where Shankar was also undergoing imprisonment,” the officer said.

They further told the police that couriers from neighbouring countries used to bring heroin through capusles filled with the drug, by swallowing it.

It was later supplied to drug dealers in Delhi, UP, Punjab and Haryana, he said.

The Delhi-based African origin persons also used to send consignments of heroin to countries in Europe, Africa and other parts of the world, Kushwah said.

Accused Shankar is a “notorious drug supplier” of Punjab. He has been found previously arrested in more than 18 cases of boot-legging and drug-trafficking in Punjab, he said. 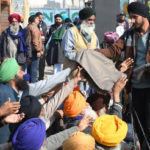